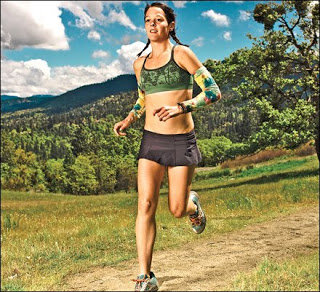 We've started to get a few single racers interested in signing up for the race - ok, actually only one - but since we make it a mission to let everyone who wants to suffer (in a good way, really!) have a chance to do so, we thought we'd better start getting things in place for matching up single racers. So let me introduce Nicole. She's a newbie who just saw the race on the midwest events calendar and is dying to try it. Although she's never raced before, she's an experienced triathlete and half-marathoner, and says that endurance is definitely her forte. In fact, here's her exact quote:

"I've never done a race like this but if I have a strength it is endurance, not overly fast, but can go for a long time."

I promised Nicole we'd hook her up, so if anyone is looking for a female who's confident that she can go the distance just let me know and i'll put you in touch. Seems like this is a great opportunity for a team of two guys to grab her and graduate into the premiere category and compete for the cash prize! (oops, did i just mention a cash prize? Guess we'll have to go through with it now...)
Disclaimer: Any resemblance that Nicole may or may not bear to the above photo is purely coincidence, as it is not actually a photo of her! bonus points if anyone can tell me who it is though! 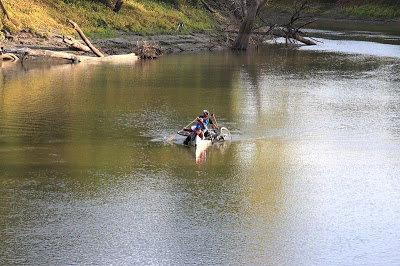 Three people and three bikes in a single canoe?!  If you think that's crazy, just wait till you see what's in store this year!

Just got this in my email and it brought back so many good memories i thought i'd share it.  It also gives a great first hand perspective of the realities of adventure racing (where realities should be read difficulties) and there's even a few good lessons in there for the discerning reader.  Enjoy, and thanks Scott!

Scott’s Race report
I was extremely excited about this race.  I am old (48), slow, but pretty enthusiastic.  Terry B. and I had planned to be in the race but were looking for another teammate.  Both of us have done triathlons.  I had done the NDAR in 2007 with Mario C. who is an extremely good athlete and had only gotten better.  Decided Mario was now out of my league.  We heard that there was another racer from Bemidji looking for a team.  Had some reservations about an unknown because you don’t know if you will get someone you can’t get along with.  Decided to risk it and it turned out to be a great move.  Dave G. who had also done the race in 2007—on Andy’s team joined us in the last week.
I went to the Monday pre-race meeting and only got more excited.  Andy talked about the transition areas and let it out that a tree climb was near transition area 2.  I am not a climber, so on my next bike ride I checked out the tree.  I looked at that tree probably five times over the next several days, assessing whether I could climb it.  Mostly it just made my hands sweat.  As it turned out, I never got the chance.
Showed up for the pre-race meeting on Friday night.  Terry had arranged a canoe.  Met Dave and figured it would be a good race.  The pre-race meeting at Cabela’s was well attended and we used it to generally figure out our final gear list.  Food was big on my list, same as in 2007 but I didn’t really eat much of it.  The pre-race meeting was well organized.  Andy makes for an interesting speaker and that helped breed enthusiasm as well.
The night of the race we got our canoe dropped off.  I got very little sleep.  This was my 15th “event” of 2009, and didn’t have any trouble sleeping for any of the rest of them, but knew this would be a challenging race.  Ate a good breakfast--egg mcmuffin and an energy drink.
At 7:30 we got our maps.  We had two little Ziploc baggies to put our map and passport in.  (Left the bigger bags in the bin at checkpoint 2).  This proved bad because we could only see a little part of the map at a time.  Never really had the map, the clues, and the passport clues out all at once to compare or double check. 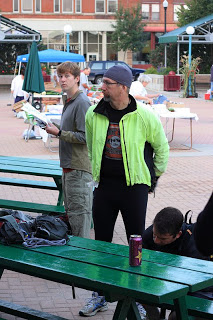 Scott waiting for the race start. 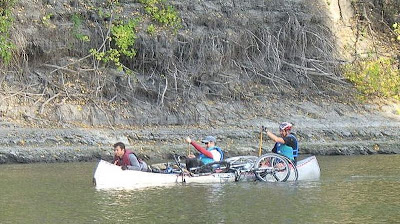 I had an absolutely great time doing this race.  I will remember it much longer than the other triathlons, bike races, etc. that I did this year.  I will wear the shirt with pride regardless of our place of finish.  Couldn’t have had better partners than Terry or Dave.  I was impressed with Andy’s level of organization.  He had a lot of organization, great prizes and really great sponsors.  This was a first class experience for me and it will make me want to do this or another race again in the future.  Scott. 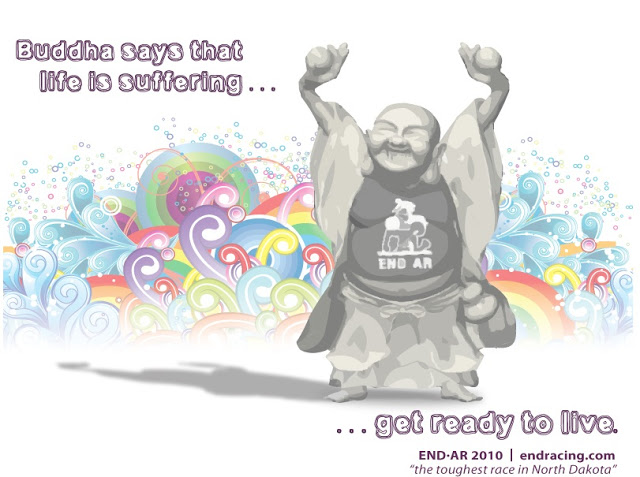 Are you signed up yet?!

In lobbying the city for permission to do what is of course largely perceived as crazy stuff, I had to submit a report containing details about the upcoming race. I also had to make an appearance before the Grand Forks Safety Committee which was broadcast live to the community, during which the cat was let out of the bag about at least 'element' of the coming race. Since following the meeting a link to the full report appeared (briefly) on facebook, i figured that in the interest of leveling the playing field i'd let everyone know that, yes, there may be a portion of the race that requires swimming in the Red River. Rest assured, there will be ample safety provided and the swim will be optional, in case swimming in the Red is a major phobia for someone. The exact nature of the swim, it's length, and purpose, however, will not be disclosed as of yet. 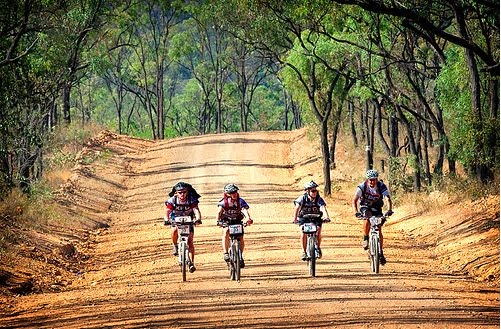 The link here goes to a friend of mine's race report from the XPD - a 10 day expedition race in australia.  Just wanted to put it out there to let people know what the upper end of the sport looks like.  Believe it or not, there's not much difference (logistics aside) between a 48 hour race and a 10 day race - in my opinion the most difficult transition is between 10-12 hour races and 36-48 hour beasts, where factors like night nav and sleep deprivation really test a team's adhesion and the individual members commitment to the common goal.  For some these longer races can seem easier than shorter ones, where competetive teams have to push themselves hard for a chance at the podium.  When you're going to be trekking for 150 miles, running the first 5 just doesn't seem to make much sense.....

I was out yesterday on a training ride and thought i'd check out the area i'd thought would serve as the main trekking section of the course (based on a purveyance of the area via Google Maps).  Looks like it's going to be better than expected and will only entail travel almost entirely on the wet side of the dike, which is much more fun than running down residential streets.  Looks like barring navigational mistakes, there will be about 5 miles or so of foot travel during this section, and another 1-2 miles during another section.  So this comes to about 6-7 miles of total foot travel, not including the occasional short forays into the bush that may be required to find a CP or two during the bike, packraft, or paddling sections.

END-AR will be a traditional style Adventure Race - and as such, many of the details are kept purposefully vague until the day of the race. The course is designed to allow novices to finish in under 10 hours (or in the case of the May race [END-SPAR] 4-6 hours). Although no race of this length should be take lightly, adventure racing's unique format tends to cater to a broader range of athletic talent than some types of races, for several reasons.

This being said, there are a few things that ought to be considered prerequisites for taking on such a race. Competitors need at least basic mountain biking as a significant portion of the biking sections will not be on paved roads. In addition, participants should be comfortable in a canoe (although most - not all - of the paddling will be downstream). Lastly, at least one team member needs to understand the basics of map and compass navigation. Mandatory checkpoints will be pre-plotted by race staff, but all navigation is the responsibility of each team.

All aspects of the course will have been tested and pre-run, and - we promise you - fantastic. Be ready for some serious adventure.

If you’ve never done a race, all I can say is sign up and do one...this one or any other...but get out there and see what you are made of. And when things start to seem too hard, remember your teammates and work together. For that is where the real reward of adventure racing comes - a reward that is notably absent from triathlons, marathons, bike racing, etc. You are not alone! Good teams never forget this!