What were we thinking?  Ending early registration on new years eve..... heck, that doesn't make sense?  what about all the people who's new years resolution is going to be to get in shape for the yeti division?  don't we want to give them a little encouragement and let them save money too?

Well, we've got it straight now - early registration pricing will last all through January!  But don't delay, we've secured a deal with Swiftwick for custom graphic arm-warmers for all participants, but production requires some lead time (this ain't no namby pamby screen printing job we're doing here...) so the sure to be collector's item custom versions will only be available to racers who have registered by the time the order has to go in.  I've been told we'll need to get things going by about mid january, so get your team together and get registered! 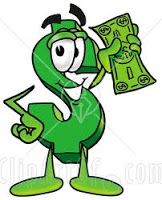 Here's a look at what you get for your $40 dollar entry fee:

Heck, seeing as how all the proceeds will be going directly back into the community, you can hardly afford not to attend!

First the fire -
I'm recently back from participating with Team Yogaslackers in the Abu Dhabi Adventure Challenge, a six day stage race taking place in the fabulous United Arab Emirates.  Since its inception in 2007, the race has quickly gained recognition as one of the toughest and fiercely contested adventure races in the world.  Maybe this is because the perks of this race don't end with fantastic scenery and a grueling course - it's actually a government supported event (to the tune of 1.5 million US dollars).  This results in fantastic media coverage, swanky accommodation (2 nights booking in a 5 star resort hotel included in entry fee), rock bottom entry fees, and a prize purse of over $150,000 that pays down to 30th place.  Team Yogaslackers, captained by my twin brother Jason, took 19th place last year after dragging first time adventure racer but world class mountaineer Eric Myers (who claimed the race was harder than climbing both Everest and K2 in a comparable six days - and he's successfully climbed them both) for miles across the deserts of the "empty quarter". 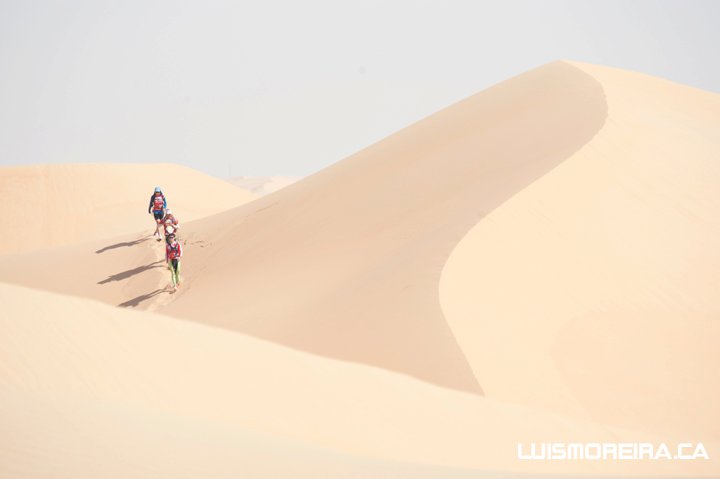 Teams crossing the Empty Quarter
The 100+ km desert trek stage is always the toughest test of the race.  In previous years teams were given 36 hours to complete it, during which they were forced to take a minimum of 8 hours of rest.  For reasons that I imagine can only be appreciated by a select group of deranged elite racers and/or particularly sadistic race directors, the race organization made a few changes to the stage for 2010 - they made the first two days of the race all leg work (biking and running), made these initial stages harder than ever before with twice as much elevation gain as in years past,  added a 96 km mountain bike leg over hilly terrain on roads often unrideable due to massive sand drifts that segwayed immediately into the desert trek, added only two hours of time (38 instead of 36 to complete the entire section of bike plus trek), and oriented the trek in the opposite direction so that teams were forced to climb the soft and steep side of dunes and descend down the hard stuff.  Unseasonally high temperatures upwards of 100 degrees fahrenheit didn't help.  Ouch.
It was brutal, but we made it.  I struggled mentally the most about 22 km from the end.  I wasn't thinking straight and my addled brain had me doing the math incorrectly and convinced we now wouldn't make the cutoff and had shot ourselves in the foot trying to get just one more optional CP.  There was lots of yelling and swearing.  Heat and exhaustion do strange things to you.  As adventure racers, we do such strange things to ourselves.  Yogaslackers ended in 14th place - beating out several super fast teams that were just eaten by the desert.  You can see more photos of the race by visiting the official race site, or the websites of Checkpoint Tracker or Breathe Magazine, both of whom covered the action.  Below are a few more photos from the race. 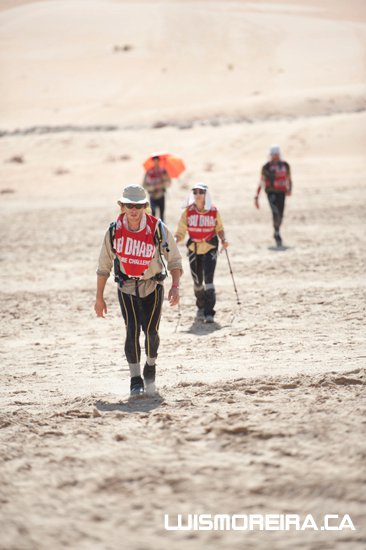 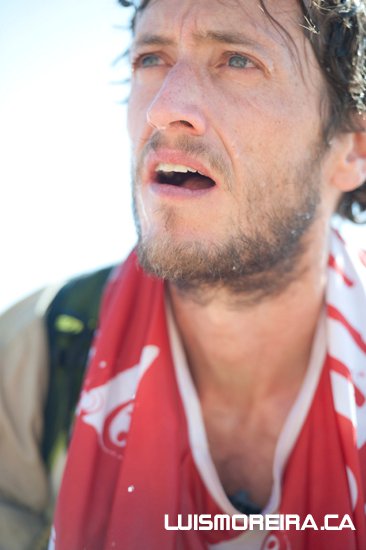 L to R: Team Yogaslackers near the end, me near my low point. 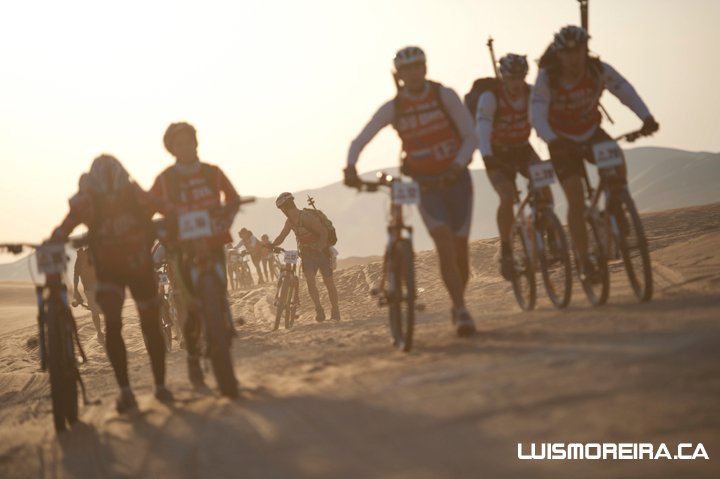 The bike section leading into the desert trek.
Then the Ice -
Registration for the ColdAvenger Extreme North Dakota Iceman Triathlon opened on December 1st.  People are signing up and taking advantage of early bird registration prices, which end with 2010.  All registrants will receive a deep discount on gear from our title sponsor, ColdAvenger for the purchase of up to two masks - awesome cold weather training gear that we promise will allow you to, as their slogan states, "stay out longer".   We will be giving away five of the masks leading up to the event via a drawings held the last week of January. We'll draw one female yeti, one male yeti, and one team from registered racers on Jan 31st, so make sure you're registered by then to be eligible!
Cash prizes of $100 for the top male and female "yeti" and $300 for the top team are up for grabs, but won't be easy pickin's - the top male from last year was the first registrant this year and I've got it on good authority that the top female (who happens to be my wonderful wife) will be back as well.  Then again, I also know of lots of new local talent looking to make their mark this year by vying for top spot.
Rest assured though, there'll still be awesome swag and loads of raffle prizes thanks to our wonderful sponsors for those who are just looking to challenge themselves against the course or just come out and have a great day of fun racing.   We'll keep registrants posted via a separate newsletter as we finalize details about racer swag, additional event sponsors, course details, and any cross country skiing and/or winter biking clinics that we put together in the coming months.
Cheers and Happy Holidays
Andy
ENDracing Team

Registration for END-IT is now open!  Visit the END-IT page (by clicking on the link above) for all the juicy details and to register now!  Woo hoo!  And don't forget to join the mailing list (link at right) once you register to make sure you get all the race updates!