Alpacka rafts, maker of the finest packrafts on the planet, have just graciously agreed to provide two packrafts to give away as part of the hardest race in North Dakota.  Just one more reason to make sure you don't miss this it!!!  Check out their website and forum to pick up tricks about packrafting, gear, to discover the wild and crazy packrafting community that exists, and learn why I feel the packraft is such a indispensable adventure tool. 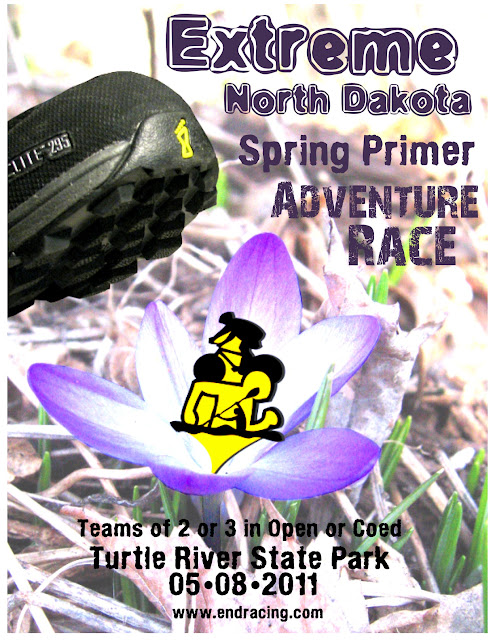 I'm back from a short vacation to California and starting to get psyched for our next race, the Extreme North Dakota Spring Primer Adventure Race (END-SPAR).  Registration is now open, so get to it!  This race is the perfect opportunity to get your feet wet if you're new to AR and get your team ready for the upcoming season if you're a returning veteran.  In truth, even the veterans are going to get their feet wet.  You can check out videos of last years race here and here.   We're also developing a partnership with Winnipeg's big adventure racing crew, SwampDonkey, so you can expect to see some North of the border talent at the start line, as well as some free entries into some of their awesome events.  Team Yogaslackers will be back out helping to design the race (or racing themselves - Chelsey Gribbon, the pint sized female powerhouse of the team is joining two local women to form an all female team to take a run at the prize this year) so as repeat racers are sure to expect, its going to be epic.  See the website for more details, and feel free to shoot me an email with any questions. 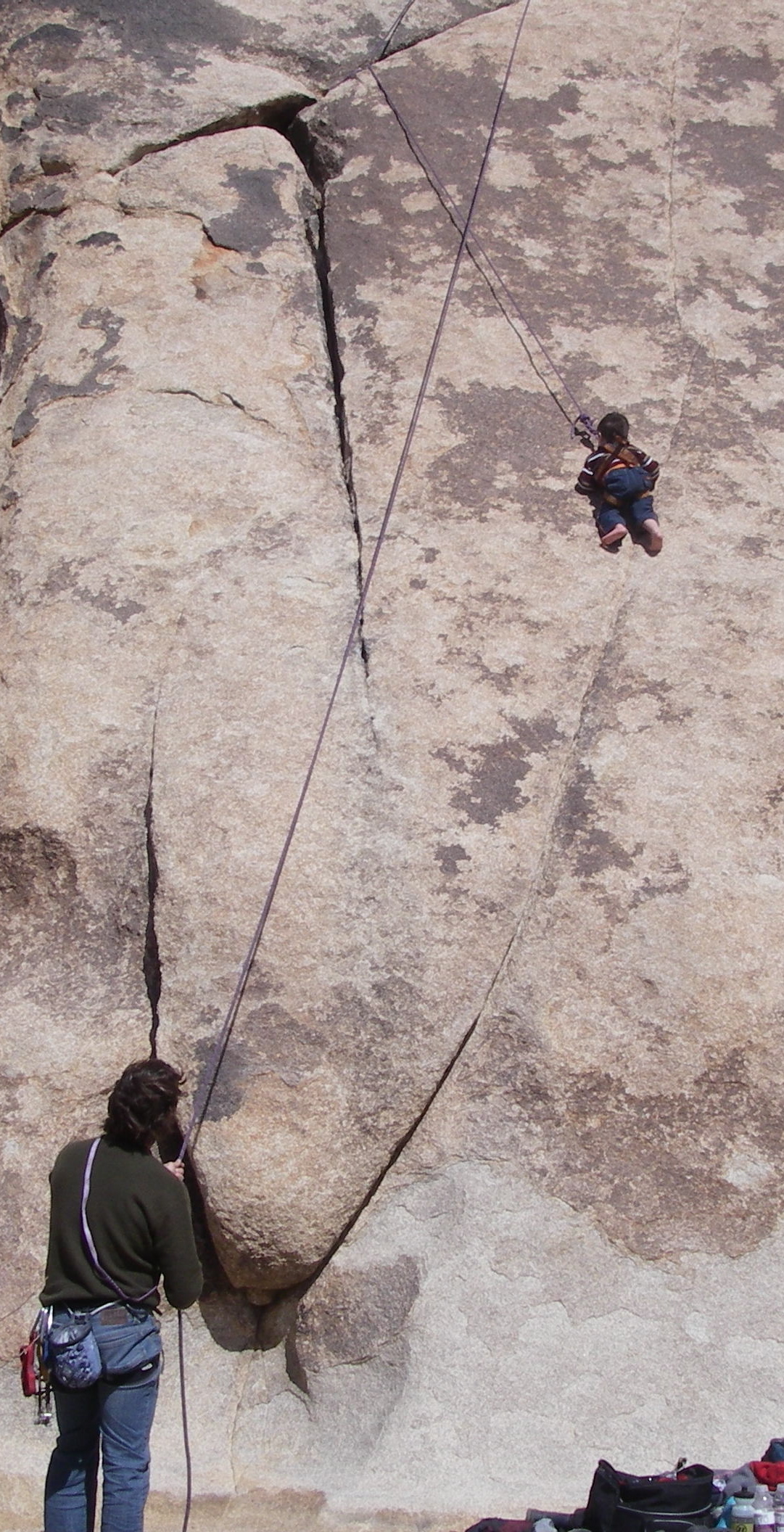 On the Non-Profit side of things we're making slow but steady progress - starting to look for funding opportunities for the boat house project while waiting patiently for Uncle Sam to approve our application for 501 c(3) status.  And for you prettier racers out there (read younger - as in under 25), we're also kicking around some ideas about putting together a couple of ENDracing/GroundUP adventure race teams for 2012, so if you have dreams of being a sponsored racer and crushing courses all over the world with your good looks and speed - better make sure to show us what you're made of this year (no, we don't really care how good you look).  Details will be forthcoming over the next few months.
Finally, don't forget about the climbing competition at Northern Heights Rock Gym on April 2nd - after all, there IS going to be climbing at END-SPAR, so you might want to brush up a bit.  The photo to the right shows my youngest, AJ, putting to use the skills he's gained at NHRG out in Joshua Tree National Park a few weeks ago.  The young have an innate spirit and love of adventure, which is why adventure goes such a long way towards keeping us young.
Cheers  -
Andy
ENDracing Team

I have to tell you that as a small, local, barebones, volunteer dependent race organization we're truly blessed.  And while this blessing extends to many areas of race facilitation, I want to draw particular attention to how it applies to the media we get out of our events.

In short, our photographers and videographers rock - no question.

check out the following video from a big California AR crew (look at their starting line up!  woo hoo!) - these guys have some serious backing and in my opinion aren't capturing the energy nearly as well as the vids in the previous post do.  And then compare some of the photos taken and the resulting slideshow from a recent event put on by one of the biggest and best East Coast race organizations (Bonk Hard racing) to the Brady's iceman set which we recently added to the END-IT page. and don't even get me started on what Caylan Van Larson can do behind a lens.....

I'm not saying these other organizations suck and we're awesome - only trying to give a special thanks to the folks who have so expertly captured the energy and spirit of what we're trying to do.

Registration is now open for END-SPAR (Extreme North Dakota spring primer adventure race).  Race is capped at 30 teams, so get out go find your crew!  Check out the race page for detailed information and to register!

I know, it's not exactly February anymore, but we've been, well, you know, busy.

Working backwards, there was the second annual ColdAvenger's Extreme North Dakota Iceman Triathlon, on February 26th.  Over 125 hardy souls took on the challenge and with starting linetemperatures of -13 F, -29 wind chill they all are champions in our book. Dakota Harvest provided awesome pre and post race refreshments, Swiftwick hooked all the racers up with arm warmers, Due North by Sure Foot Corporation gave out loads of traction aids, Power to Go fueled racers with their 'five hour energy' trail mix, and everyone was out sporting their ColdAvenger masks proudly.  The event was a huge success and we can't wait until next year when it's going to be even better with the planned addition of chip timing.  Check out the END-IT page for full details.  A huge thanks to all our wonderful sponsors, volunteers, and the awesome folks of the Greater Grand Forks Young Professionals, all of whom made it possible.

Loads has been happening on the racing front personally for the team as well - I (Andy) completed (unofficially) the Arrowhead 135 on bike again this year, serving as a chaperone to Tom Fisher, a 17 year old junior from Central High School in Grand Forks who became the youngest official finisher in 34 and a half hours.  You can read my take on the adventure here, a more general piece about the race here, or visit the race website for more info.  Jason (of team Yogaslackers) has just finished 'the last wild race' in Patagonia as a member of Team GearJunkie.com in second place.  14 teams started and only six made it to the end in what sounds like an absolute epic race with some great stories.  You can find the website by clicking on the picture.
[Note: The following paragraph was accurate at the time it was written, but the relationship between ENDracing and GUP has since changed--they are two distinct entities, but all profits from ENDracing still go to GUP at the end of the year.  2014-12-13]
The exciting news for us is that as of January 3rd, 2011, ENDracing is officially a trade name of the larger organization, GroundUP Adventures (GUP)- now a registered not for profit company in the state of North Dakota.  It's the first step in a long journey to develop (essentially from the 'ground up') a thriving adventure based activities hub for the upper great plains.  After finding our way through  the mound of paperwork required to receive federal recognition as a non-profit, we're hoping to get the ball rolling this spring and start looking for funding for some ambitious local projects, including a boat house for the Red River.  'Luckily', I'm now officially done with grad school (and thus unemployed) and able to devote my full 'professional' energies to ENDracing and GUP.  We've got a few great folks lending their talents to the cause but can always use more help (in particular on the accounting side of things) and local participation, so if you've got an interest in being involved, or just want to be kept in the loop, just shoot an email to me at groundupadventures@gmail.com.
And finally, we're now in full swing planning the next race on the calendar - the Extreme North Dakota Spring Primer Adventure Race, scheduled for May 8th in and around Turtle River State Park.  It promises to be an exciting (as expected) race - expertly crafted to serve as a great introduction to the sport for novices and challenge 'pro' teams alike.  Up for grabs are free and discounted entries into North Dakota's first ever twenty four hour race, this years END-AR (part of the CP tracker series), to be held over labour day weekend in the Pembina Gorge.  We're hoping to partner with Swamp Donkey adventure racing as well this year, so stay tuned for details on that arrangement.
See you out there
Andy
ENDracing Team

The old:  The ColdAvenger Extreme North Dakota Iceman Triathlon (END-IT 2011) is in the books! Great turnout and a wildly successful event - no suprise given the hardy folks up in this neck of the woods.  Race morning temps of -15/-30 windchill did little to scare anyone off, but it did seem to encourage more people to done their ColdAvenger masks!

Visit the END-IT page to see photos and view results from the event.  What's next on tap? Keep reading!

The new:  END-SPAR, our spring primer adventure race is slated for May 8th, 2011.  The race will keep alive the one year old tradition of offering a great introduction to adventure racing, without watering it down one bit.  Now that END-IT is behind us we're turning our energies to turtle river state park and all the wicked and fun things we have planned for this spring that you won't want to miss.  Registration opens March 15, so start getting your teams together now!

Check out the END-SPAR page for all the details.
﻿﻿