Wow - what a race!  END-SPAR 2012 was our most competitive event yet with a mass of talent from North of the border coming down to challenge the local and regional crews that were raised on a steady ENDracing diet.  We're still working on all the results (man it's hard to see all those little holes in the muddy wristbands) and will post those as soon as we get em - but in the meantime check out the photo set from roving photographer Wes Peck.  I'm struck by how good looking all our racers are....

And i want to in particular congratulate all the first time racers (although we call our event a 'primer' - the best introduction to something in our eyes amounts to a jump in the deep end) who demonstrated great verve in taking on such a big challenge.  They'll be forces to be reckoned with in the years to come.

I'm exhausted.  I hope most of you (END-SPAR racers) are too.  We'll get pictures and results posted as soon as we can - i know as a racer i always think it takes so long for this stuff to happen but as a race director i also understand why - so try to be patient.

I want to congratulate all the racers - it was a tough course - a really tough one - and each of you hopefully took some good memories home.  I didn't get to see too many of you out on the course but welcome any personal highlights you will choose to share with me.  Here are a few of mine -

The two girls from Van-Kirk/Wagner showing back up at the Turtle river HQ after an hour, map in hand, declaring that they just couldn't find any of the points (they'd found one by following another team).  I gave them a three minute navigation primer and some encouragement and sent em back out.  The ended up finding all the points and going on to make the ride all the way to Larimore and back, collecting all the mandatory points, even though it meant arriving back at the finish line 15 minutes late.

The 'girls only club' and their determination with the bear hang.

Following Eschew Obsufication through the bike-whack and watching the struggle on that final hill.

Watching both teams of youth racers take on a physical and mental challenge magnitudes bigger anything they'd attempted before and somehow pushing those little bodies further than they thought possible.

I know this only scratches the surface - i hope the day provided multitudes of gems for each and all.

And finally a special thanks to a tremendously fabulous volunteer crew - you all went completely above and beyond - ENDracing would not be what it is without your dedication.

I'll link to the WDAZ news story tomorrow or the next day and write one more post soliciting some feedback - but until then - get some rest and keep training.  END-AR24 is only 119 days away.

If you're under 18 and racing in END-SPAR, you'll need to make sure you print and get your parent or guardian to sign the waiver, or bring them with to either pre-registration on Friday night or with you on Race morning if you're not going to make it Fri. night.  You won't be allowed to race without parental permission......

you can find the waiver HERE to print.

Secondly - points are being hung tomorrow and the course vetted on friday.  In the interest of fairness, please stay on paved roadways in both Turtle River State Park and Larimore Recreation area until race day!

The one mystery challenge that has been 'leaked' on our facebook page a few days ago might not have reached everyone - so if you haven't heard, you might want to research the counter-balance bear hang method.  And maybe even find a tree and give it a whirl.

Lastly, the COURSE BOOK is now available to read.  Have fun.  See you soon!

Don't forget that you can take your bikes over to Ski and Bike tonight from 6-9 pm to get em spiffy and tuned up.  you'll be doing any work under expert guidance by North Dakota bike guru Pat White.  the shop will have bike stands, buckets for cleaning, and tools in case you don't have your own.  and of course many parts you might need to get things running smoothly.  racers can also get 15% off retail purchases, so stock up on any last minute race essentials.

The bike work area will be located behind the store.

Here is a link to a map which should get you to the race start in Turtle River State Park (TRSP).  For those arriving Friday night, camping is open but on a first come first served basis (i.e. no reservations).  There are two options - primitive (tent) sites for $10 a night, and RV sites (electrical hookup, etc) for $18 a night.  I'm guessing most racers camping out will choose the primitive sites.

Please Please Please - no rogue camping!  TRSP is super supportive of our events and we want to keep it that way.  Primitive sites are limited to one vehicle and one tent, but up to six people.

Pre-registration is in Grand Forks at the Ski and Bike shop (if anyone can't figure out how to get there using the marvels of the internet, let me know and i'll help you out...) on friday evening - check out the end-spar 2012 racer directions in a larger map" target="_blank">schedule for details.  Preregistration is not mandatory but is highly encouraged - the fewer teams we have to 'process' on race morning the more likely we are to start on time!

I was out on the course today and it felt a little too easy so i took the liberty of making it just a tad harder.    Make sure you thank me next saturday.

In AR teams are only as fast as their slowest member.  Teams that want to be competitive will almost always have towing as a big part of their game plan.  On foot this can often be improvised - a piece of rope, extra strap, even a couple of leg warmers tied together can suffice to keep the team together and moving at the same pace.  But for biking, it can be nice to have something more sophisticated that doesn't get in the way when it isn't in use but is ready to go at a moments notice.  There are many types of tow systems out there - the following video shows the type i use when i race.

Here is a snippet of the maps racers will be using for the orienteering sections of END-SPAR this year. The contour intervals are every two feet. 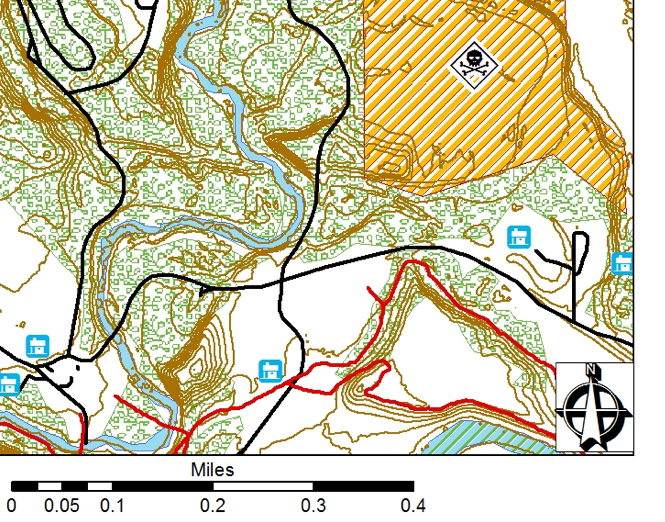 The course is 80% finalized.  Here's a look ahead.  There will be 10 mandatory checkpoints that racers must reach in order to be considered finishers.  In addition to these CP's, there will be 5 optional sections, each with three optional CPs.  Teams will be ranked first on how many optional CP's they get and then on time.  More details will follow in the race rules which will be posted this week on the main race page.

Each optional section can be completed in full or in part, but must be done so at the specified time during the race.  For instance, if you decide to pursue the  'riverwalk' CPs, you must do so after the opening trek and before beginning the first bike leg.  You will not be allowed to try to get these CP's later in the race.  Time management will play a key role a teams strategy, as some optional CPs will be easier to reach than others.

The five optional sections will include:

1) River walk - three CP's will be placed on a specified stretch of river but not marked on the map.  Teams trying to get these optional CP's can get them in any order.  All river walk CP's will be team punches, meaning the ENTIRE team will have to physically visit the CP and punch their wristband for it to count.

2) Mystery Challenges.  Each Challenge will count as one CP.  One challenge is mainly physical, one is purely a skill, and the third has both skill and physical elements to it.  The physical challenge is fairly difficult but is directly applicable to many adventure racing situations.  The other two challenges are wilderness skills.  Teams will get ONE shot at each challenge they choose to attempt.  Failure means the team cannot get credit for the CP.

3) Foot Orienteering.  There will be an optional foot orienteering section consisting of three points.  racers will be given a contour map and UTM coordinates of the points.  Although trails exist in the area, they will not be included on the map, forcing teams to navigate proficiently using land-forms.

4) Sunken Treasure.  There will be three CP's that require use of packrafts.  Some (but not all) of these my be located beneath the surface of the water and difficult to see until you are within a few feet of their location.  Good navigation will be key.

5) Bike Orienteering.  There will be a bike orienteering section with three points.  teams will NOT need to plot these points using UTM coordinates.  Teams pursuing these points will get to ride on some of the more technical trails in TRSP, which truth be told, aren't very technical if you've done much mt. biking.  The trails might include fast and flowing single track between trees and on slopes.

Again - rules and details about gear drops/gear bins will be forthcoming this week.