I heard a report yesterday that someone saw a black bear swimming down the Red River through the center of town.  Word ha 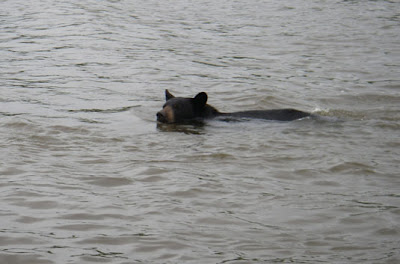 s it that he was training for the race too.  I'm a little skeptical on this last point though as i haven't recieved his registration or even an email inquiry as to whether there are still spots available.
If you're signed up to swim, don't worry, we don't see a lot of bears around here (in fact this is the first i've heard of one), but we do have a couple of other local animals.
One of 'em of note you've already met - 46 year old Robert Treuer - who just today completed the longest swim in the history of the great Red River of the North - 18 continuous miles.  I'll update the facebook page with details when i get them as to how long it took, etc, but don't get your hopes up if his time seems fast - we had a wicked south wind this morning that moved him along nicely.
﻿﻿﻿﻿﻿﻿
The other animal is 19 year old Tom Fisher.  He's an interesting case - a natural athlete who has excelled in high school cross country  but never trained for or swam competitively.  In fact, outside of a couple of sprint distance triathlons, he hasn't done any races involving swimming to speak of.  His last time in the water was nearly 10 months ago.  Yeah, i know, you're thinking that this guy isn't too bright - that 'animal' probably describes his level of intelligence rather than his physical prowess.  And while i'd agree that he is probably overly confident - i wouldn't count him out just yet.  Tom is the youngest bike finisher of the Arrowhead 135 - an ultra distance bike race held in International falls in the dead of winter - a feat that he accomplished in 2011 with only a handfull of training rides on a borrowed bike. 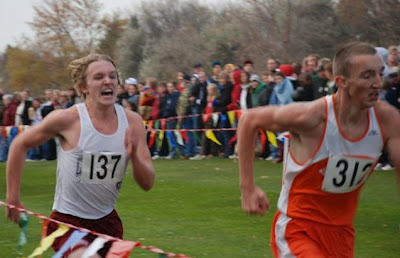 In case you don't get the Grand Forks Herald, today's cover featured local athlete Robert Treuer and an article about ENDracing's newest 'extreme' event - END-WET (July 21st).  You can read the article by clicking HERE.  Enjoy, and happy training Robert!