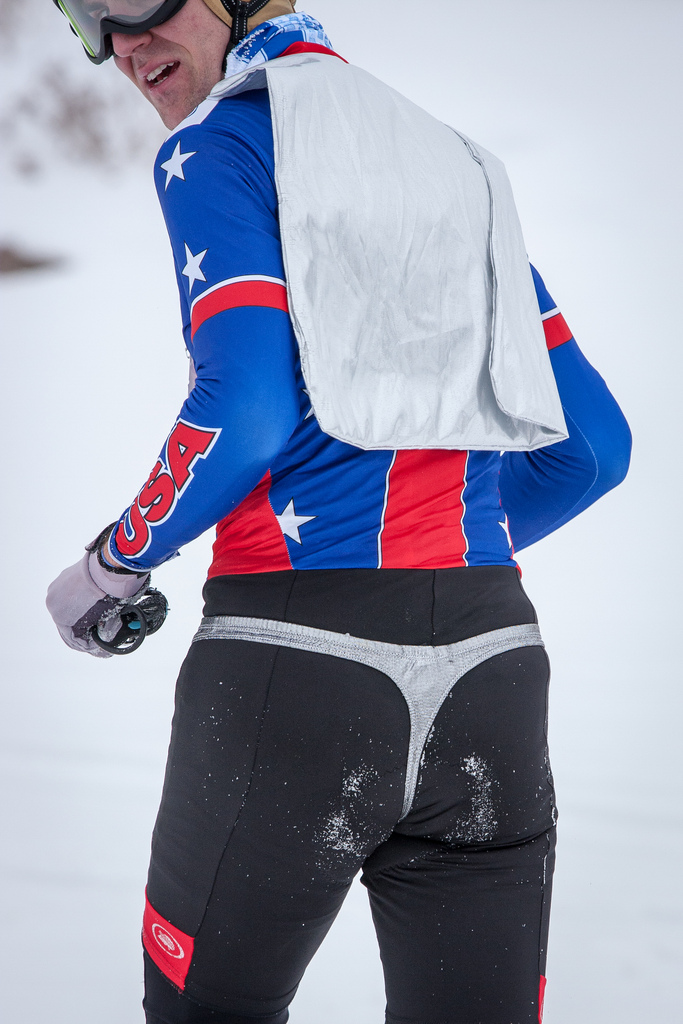 This probably doesn’t mean the same thing to me as it does to the thong wearing super-hero from END-IT, but that’s probably a good thing (just teasing – awesome costume).  For me the end of every race brings moments of reflection that for reasons unknown, I sometimes feel like sharing, so here goes.

After the race I was talking with a close friend (and also a racer this year), Ryan Wagner.  I was pleased to find out that he is a ‘crier’ – someone who is quick to be moved/inspired to tears.  Made me feel brave enough to come clean about my own such status, which I’m acutely aware of after putting on every event – I find the whole thing – the volunteers and racers especially, tremendously inspiring, so much so that I quickly tear up when I start thinking about it.

Truth be told, the last three days leading up to the race were difficult and my schedule was challenging.  It was a hard course to set this year and I was out for three nights in a row - trudging through the snow with cans of snow paint that froze up so that they had to be put next to my skin to be warmed – until after midnight.  I was worried that it wasn’t going to come together in time and that I was neglecting my wife and kids (which I probably was – a special thanks to Ryan for at least making sure my kids didn’t feel neglected… and Tammy, well I couldn’t do it without you!).  I was exhausted, anxious, and second guessing my desire to keep doing this race organizer thing.

But then the race happened.

Those of you who have been part of ENDracing for a while have probably heard my spiel before about what it is.  It’s not a business.  It’s a community.  Even though my efforts towards these ventures (ENDracing and Ground UP adventures) is now my ‘full time’ gig – it’s truly a labor of love.  I couldn’t keep going - given the sacrifices it takes – if it didn’t (if you all didn’t) continually stoke my passion for adventure and provide living examples of that indomitable spirit and openness to experience that I find so fascinating and inspiring.

That’s why there are no easy ENDracing events.  That’s some of you cursed me  a dozen times over the course of three hours last Saturday.  It is the ineffable rewards that I experience when I get so far out of my comfort zone that I really have to dig deep to not just go fast - but to go at all - that I am (in this crazy way) trying to pass on.  And so for while some of the racers (anyone who could say they were really ‘racing’ probably) it was just an awesome and tough event (don’t worry, ENDracing has plenty of offerings to get these guys and gals to contemplate the meaning of life too), for many of the participants I suspect it was a more monumental triumph.  I get moved remembering those skiers I saw way at the back of the pack on Saturday – thinking to myself that the task ahead was so daunting that they simply couldn’t finish.  I knew they’d likely be pushing their bikes for miles, and that the run was the toughest we’d ever had in the iceman.  I thought – “damn, they’re screwed!”.  But in almost every case, I was proved wrong, and I love it. Many of these folks that have fully embraced what I love about all of this – they have decided to see what they are made of – that conventional notions of being ‘ready’ for an event sometimes lead to far less self discovery than taking on something for which you feel completely unprepared.

I’m also buoyed by the show of support from the community – the kind words of the spectators and all the folks who answered the last minute call for volunteers.  There’s also a great core group of folks who consistently give time and effort – lots of it (some of them at every single race) – without asking for anything in return.  You know who you are.  ENDracing wouldn’t be what it is without you.  And then there are the sponsors.  In particular for this event, this year’s sponsors were awesome.  While I hesitate to discuss sponsors for fear of alienating someone – I think it’s important to recognize the local support (in particular) that we’ve received for the Iceman.  The major sponsors for the event gave both time and money and lets be honest – it’s not really a good business investment.  But it is a good community investment, and it allows us to put on a great event of incredible value at a fraction of the cost to participants that would normally be charged.  So we want to thank all our sponsors – especially the ones most intimately connected with the event – BeMobile, Due North, Dakota Harvest, Ski and Bike, David Nord, and last but not least the Grand Forks CVB who has really gotten behind ENDracing in general over the last few years.

Finally, I want to say a word about the kids in this race (I hope you’ve made it this far!  This is the best part).  I’m so excited to be starting to realize this part of my/our vision – to start challenging the sometimes assumed beliefs about what kids, and people in general, are capable of.  We are ALL capable of so much more than we probably believe – than our culture/condition/society/self-story lets us believe – and for many of us, adults in particular  this is a HUGE hurdle to overcome.  Seeing these kids out there – getting them out there – has real transformative power – not only for the kids themselves, but for everyone involved.  We had a 15 year old girl finish the whole course.  And we had an 11 and 12 year old skiers, 12 and 13 year old bikers, and a 13 year old runner (all girls – come on guys!) – scrapping their way up the dike, pushing (and riding) the snowmobile trails, and post-holing through the woods alongside all of you.  Sharing these tough experiences with these youth – serving as demonstrations of mental fortitude and serving as role models – will have profound consequences on their lives.  Hopefully, it will have an impact of equal measure on your lives too.

Alright – that’s the end of my spiel.  Now go out and thank the sponsors, congratulate each other, and share your stories and what inspires you.  See you next year, next race, or next week.  Big Love everyone – ENDracing out.