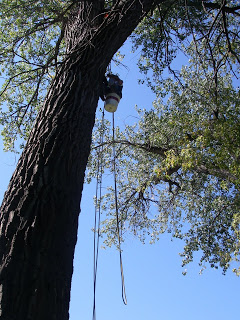 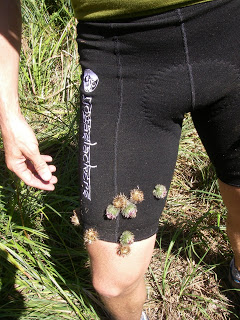 Clockwise from upper left:  Jason setting the harder of the two tree climbs; Death Star balls adorn Jason's bike shorts; contemplating the best way to reach a CP during a pre-run of the course.

Jason has been here since Tuesday and will have had a full course run through by the end of the day (thanks Ben for taking him through the final bit!).  As such, we've made a few changes worth noting and learned one or two things that should also be mentioned.  Here's the list:

1)  NETTLE: There is some stinging nettle on the course.  Not as much as last year, but it's still out there and, depending on route choice, may be prevalent in areas.

2)  CLIMBS: The climbs, which are all optional points (called rogaine points to differentiate them from the mandatory Checkpoints) are not necessarily easy.  Each of the three climbs has a different character, and only one team member will need to surmount each climb (and it can be the same team member for each of the climbs - that is up to the team).  All equipment for the climbs will be provided and trained belayers will be used to ensure safety.  Climbers will be allowed to rest on the rope during the climb if needed, but a time limit will be enforced - once the time limit has expired a climber who hasn't reached the top of the climb will be lowered to the ground and have to go to the back of any line to take another attempt.  If there is no line, they can try again immediately, but will still be lowered to the ground to ensure fairness.  The time limit will be short (3-5 minutes, TBD) and several sets of harnesses will be available at each site to keep things running smoothly and minimize any potential wait time.  In addition, each climb will be accessible at at least TWO points during the course, so if there is a long line when a team first hits the climb they can always skip it and hope there is not as much of a wait when they pass near it again.

3) BIKE FERRY:  The bike ferry across the river for the pack - raft section will now be mandatory.  Because there may be teams that were planning on skipping this section and chosen packrafts unsuitable for carrying bikes, the race will provide one or two inflatable boats at the ferry point for use on a first come first served basis.  They will not be inflated, however (although means of inflation will also be provided) so teams choosing to use these boats will need to inflate them, ferry bikes across the river, and return the boats to the original side of the river.  The ferry is short (less than 25 yds) and manageable, and a great 'adventure' aspect of the race, and it ensures a more continuous flow of the course.  Besides, everyone will already be wet!  I strongly advise teams not to have their first experience with blowing up and using their packrafts be during the race!  Get it out, blow it up, and figure out how you're going to use your boat.  This will save lots of time over trying to figure everything out after 3-4 hours of racing.

4)  DIFFICULTY:  This is - as advertised - the hardest race in North Dakota.  It is possible that all of the teams will not finish.  A fast and experienced team will, barring a big mishap, likely clear the course in 8-9 hours (I might have to revise this after the first full trial run by a non-local doing the course continuously next wednesday).  If this is your first race, don't expect to get all of the optional points.  Navigation can be challenging for new teams, and can considerably slow down the pace of even very gifted athletes.  Top adventure racers exhibit mastery of many skill sets, and also have honed through many races their ability to keep moving and minimize time in transition areas.  If you're not a top adventure racing team then you might have more fun making it your goal to finish the race as a ranked team, than to compete directly with the folks who have alot of races under their belt.

5)  FINAL THOUGHT:  we have a wonderful turnout this year - lots of teams from minnesota, fargo, and even further afield in iowa.  It's going to be an epic event - have fun with your fellow racers and your team-mates, believe in yourselves and you'll have a great race - whether or not you finish.  We've got great sponsors, awesome volunteers, and tons of passion into this thing already - it's going to be amazing.  And try to remember as you're miserable and suffering out there (which is virtually guaranteed to happen at least once during the race) that it was designed to push you out of your comfort zone and that, yes, i have done the whole course - twice.  (-=