Tim Bauer and Grant Mehring directed END-SURE in 2015.  We couldn't do it without them!  See more writing by Tim at his blog, Trails and Travails.

FIRST of ALL, thank you to the almost 90 participants who came out to experience this event! Many of you traveled significant distances and trusted that a good event would be provided. I hope your expectations were met and your journey was safe. I hope that you’ll return not only for END-SURE, but for other Extreme North Dakota Racing events.

SECONDLY, to all the volunteers who gave time, effort, and energy both before, during, and after the event. There were many people working behind the scenes, as well as being present on race day. A special thank you to Cory + Maggie for staffing the aid station and to Butch , Sandy, + Brenda for providing transportation for the 25k runners. 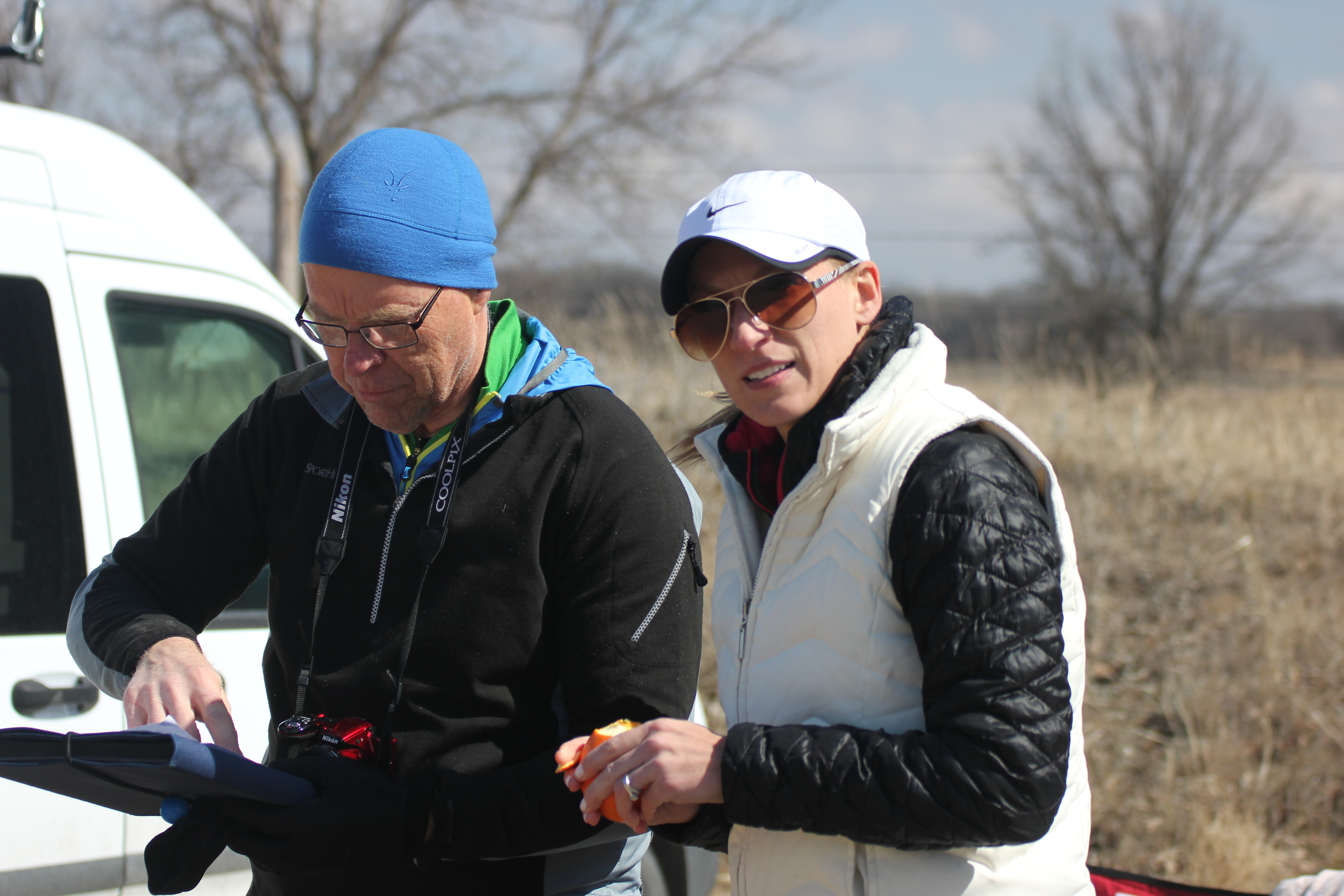 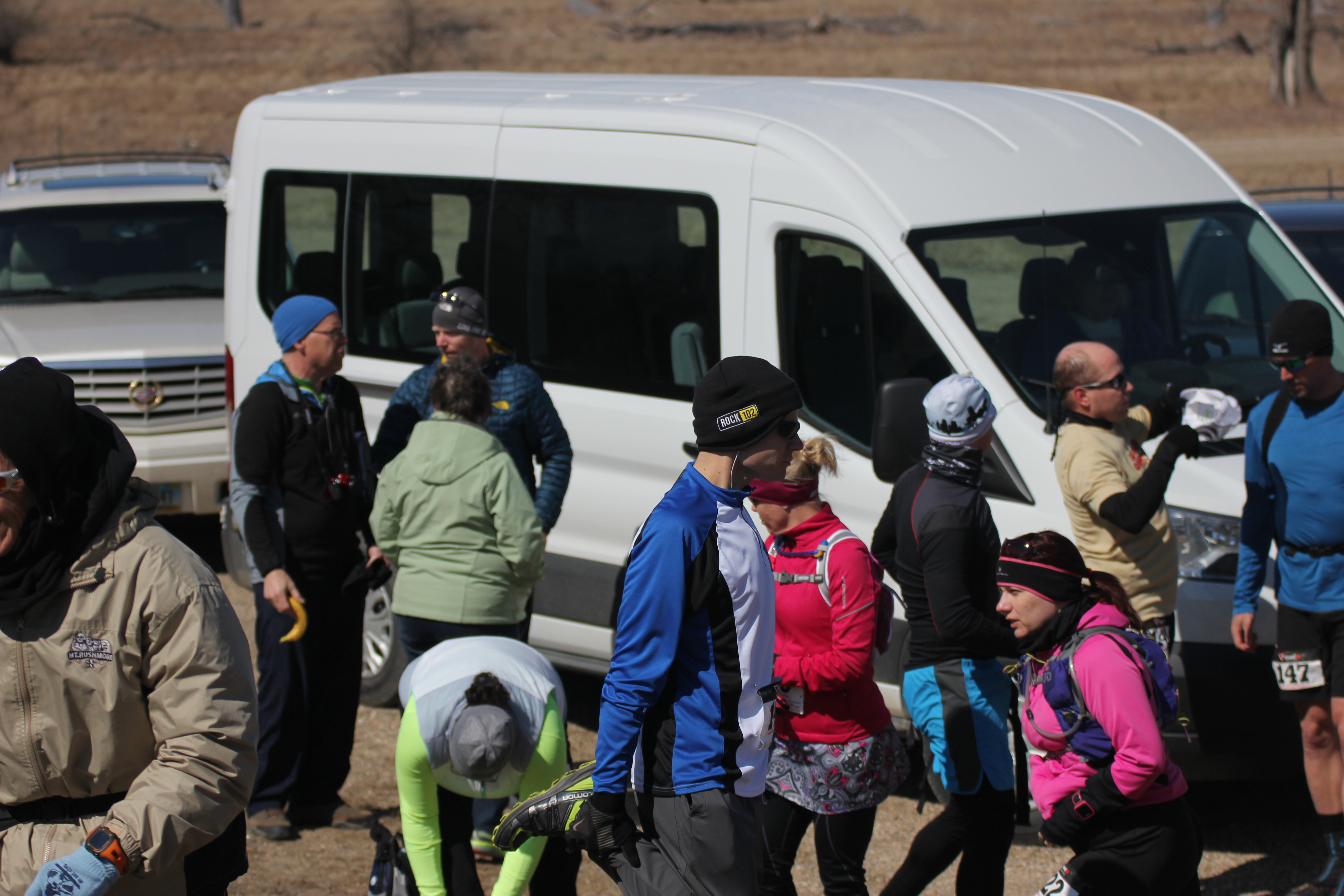 1 of 2 vans and Escalade that transported 25k runners.

Also, the event wouldn’t be nearly as comfortable without the hospitality of the Hansen Family at Sheyenne Oaks Campgrounds. In between lambing and calving, they took time to get the facility ready for the onslaught of people. It was great to have parking, bathrooms, and plenty of space for food and visiting for the event!  Feel free to use their campground for your personal and family needs in this scenic area of North Dakota.

The five 100k participants began with about an inch of snow underfoot. The last 100k runner (Dave) was about .25 mile from the finish when it began to rain. This was a determined group of runners. The west side of the Grasslands with the open prairie allowed the winds to blow unabated. This added extra effort and punishment to the runners, but they all persevered. 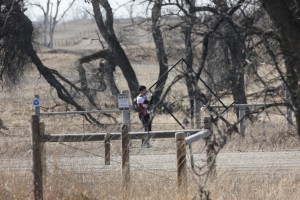 Steven coming through the cattle gate with 25k to go.

Steven finished the 100k in 10:32. Dave,(who ran with me last year dropping at the 75k mark) finished this year with determination and a smile on his face. Carlos, who ran his first 100k came in with 12:59 on the Trail. Jamie, using the light on his iPhone for his final miles crossed the finish line in 13:23. 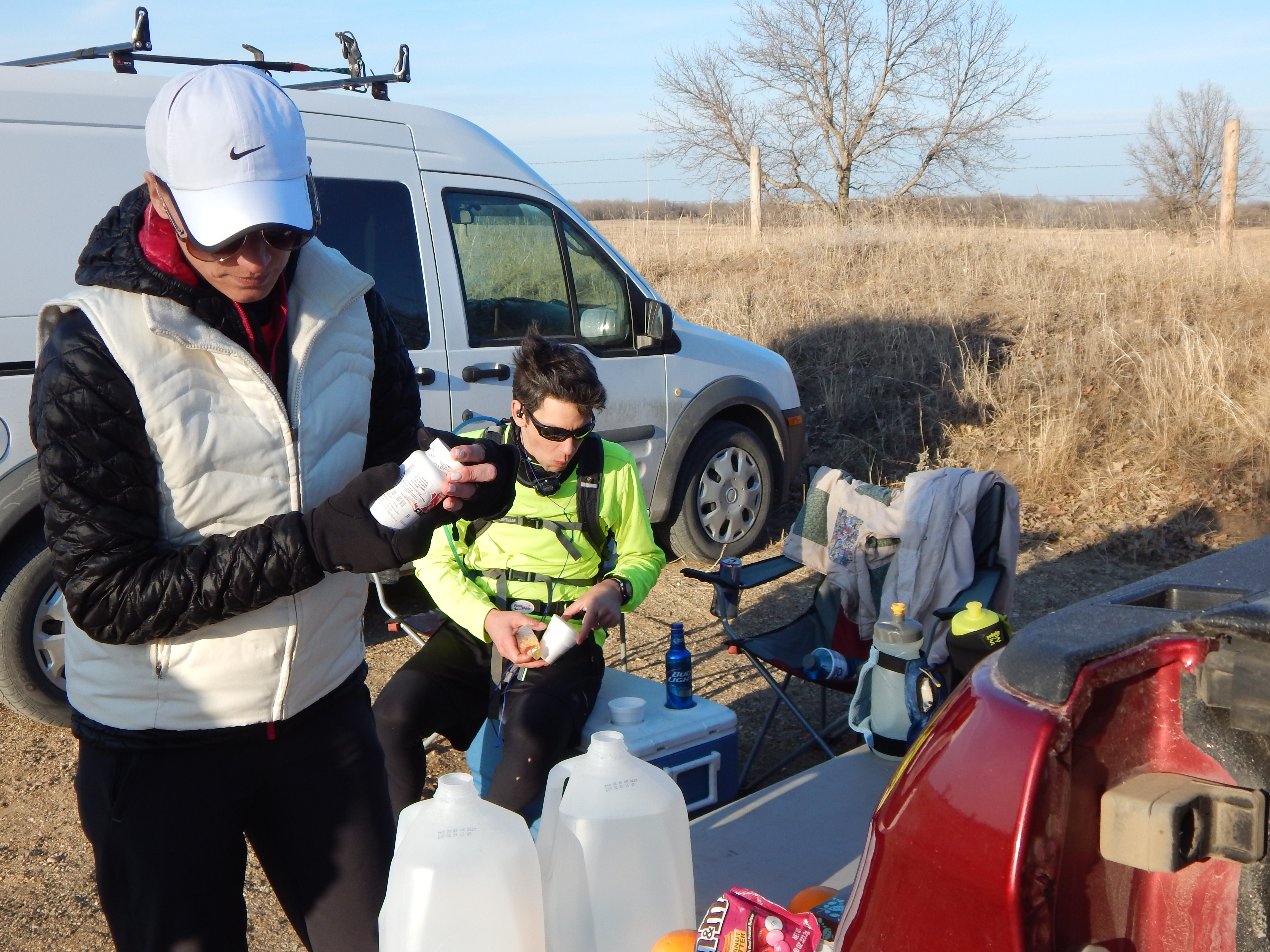 Tracy getting rest and nourishment at aid station. 100k finisher.

The 50k group was just shy of 50 participants. The ages and experiences were as varied as the Trail terrain. A woman from Virginia came to get another state off of her list to complete at least a marathon in all 50 states. Dave from Colorado came with his son and camped at Sheyenne Oaks. He too, was checking off another state for his ultra in all 50 states. Dave didn’t run, but walked with determination and a bit of a limp. One of his canine companions was his trail partner. He finished this journey with a smile and an appetite for food following 31 miles on foot. Maggie even fed his dog at the 50k turn around! 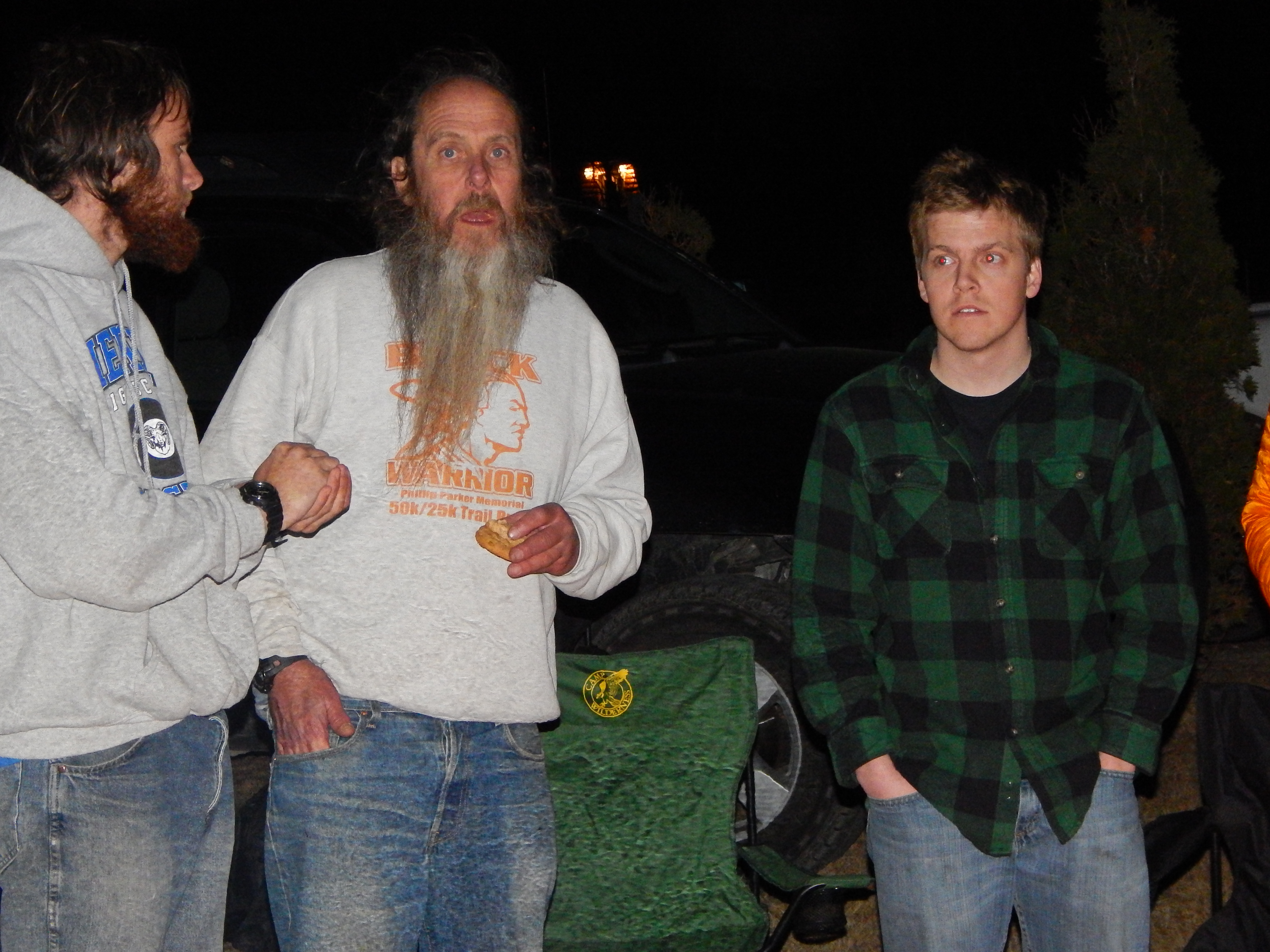 Dave, (in center) who with his dog completed 50k.

Below are other pictures from 50k runners. Most of these were taken by Cory, while Maggie and I staffed the aid station. 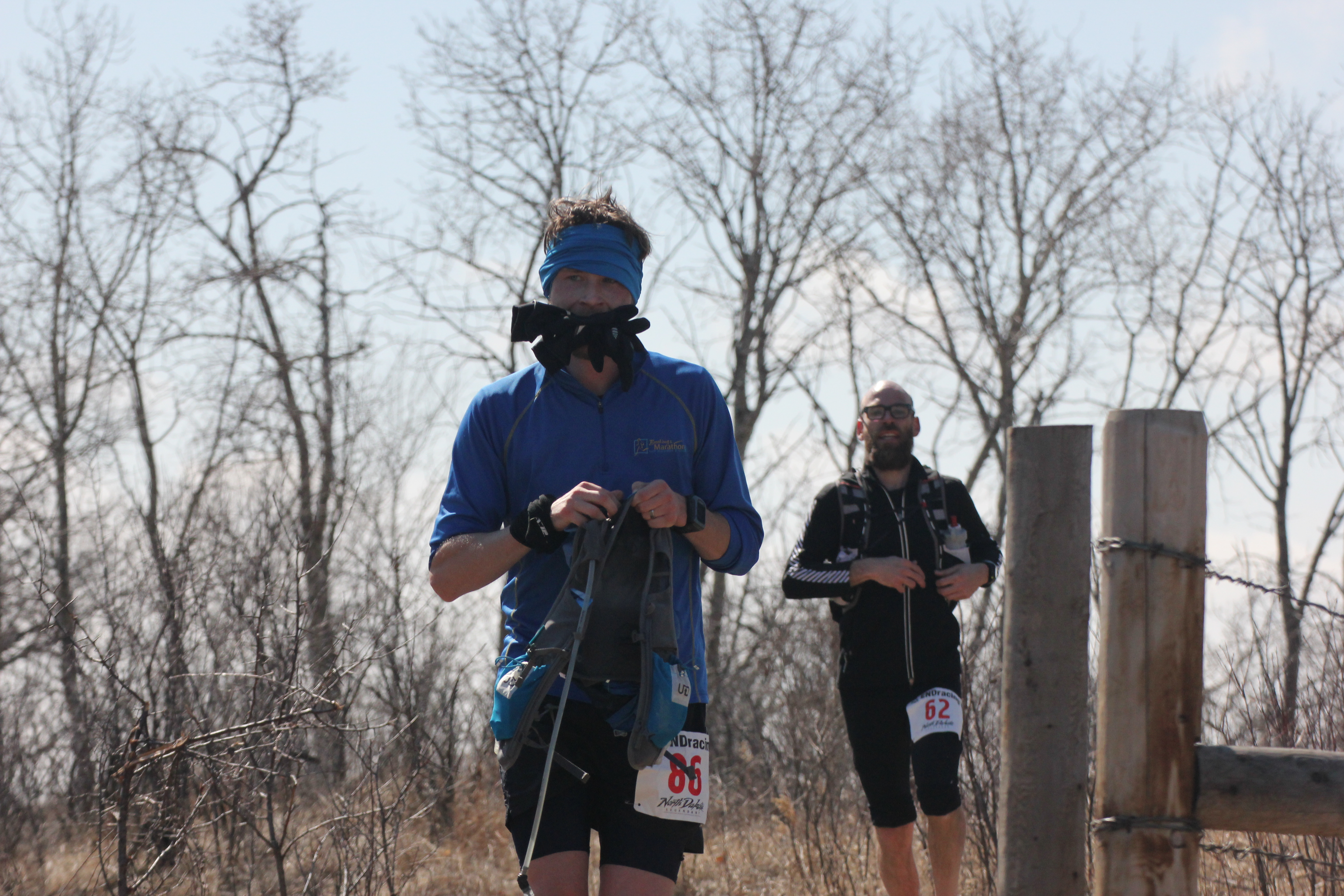 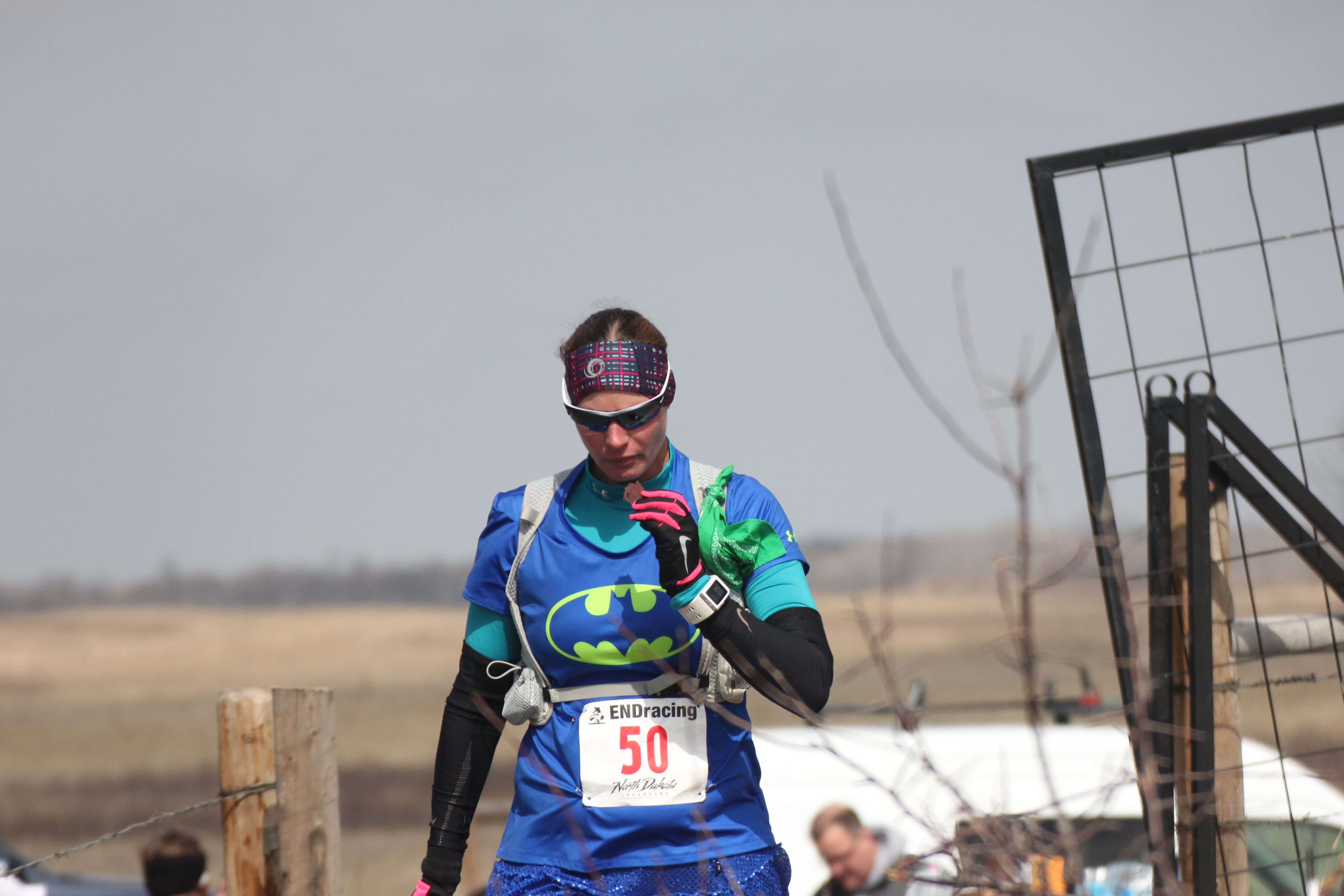 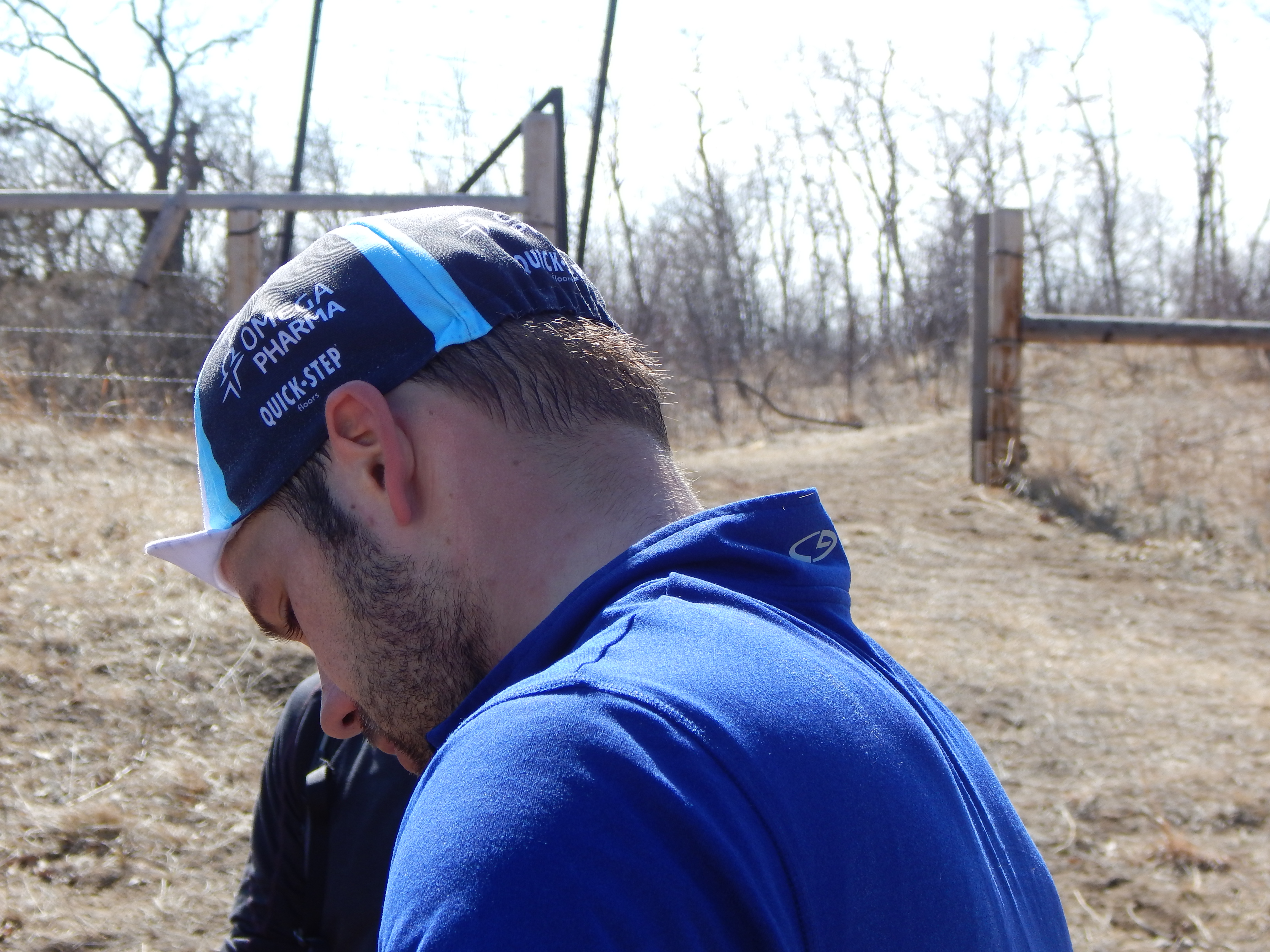 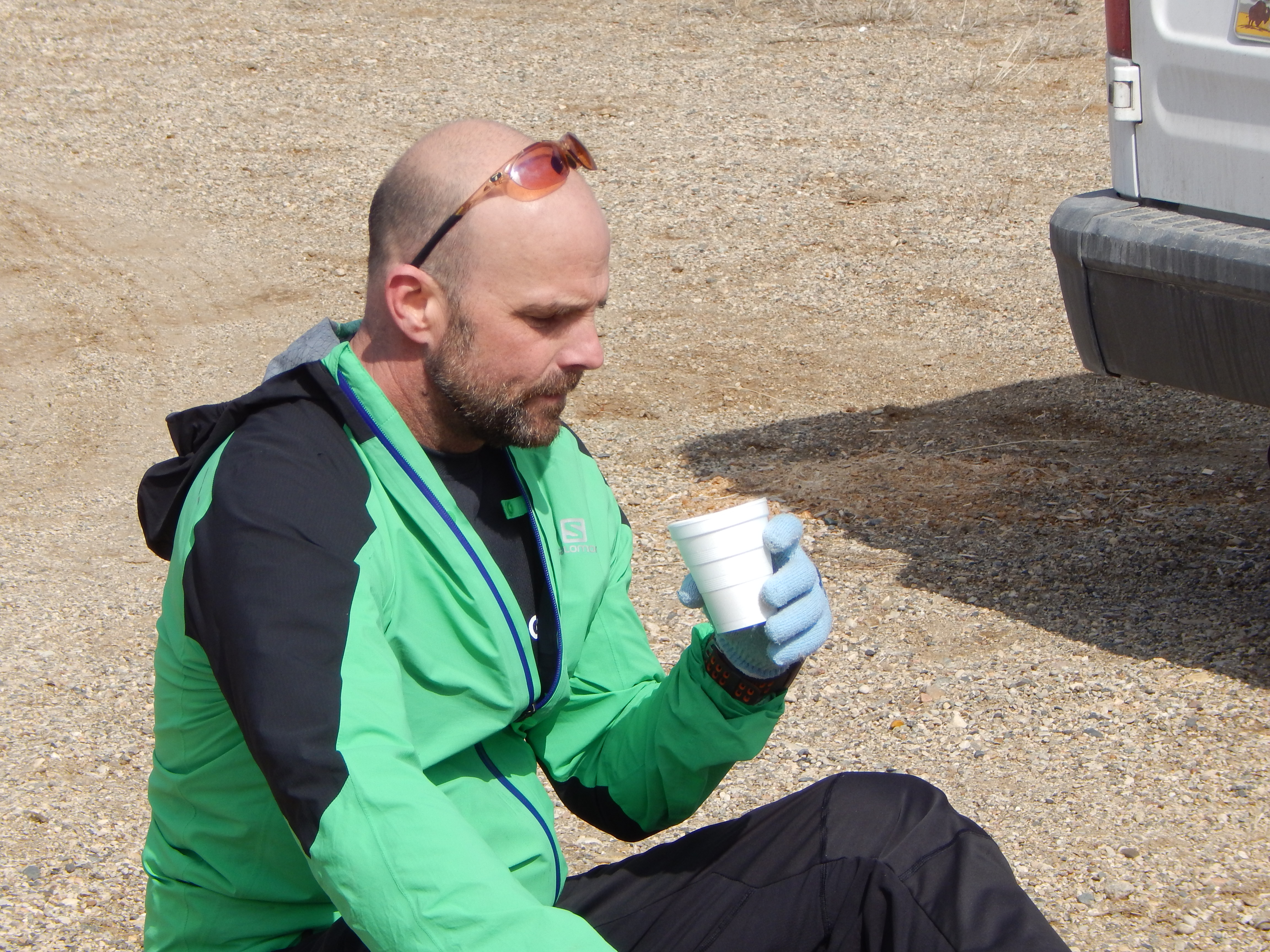 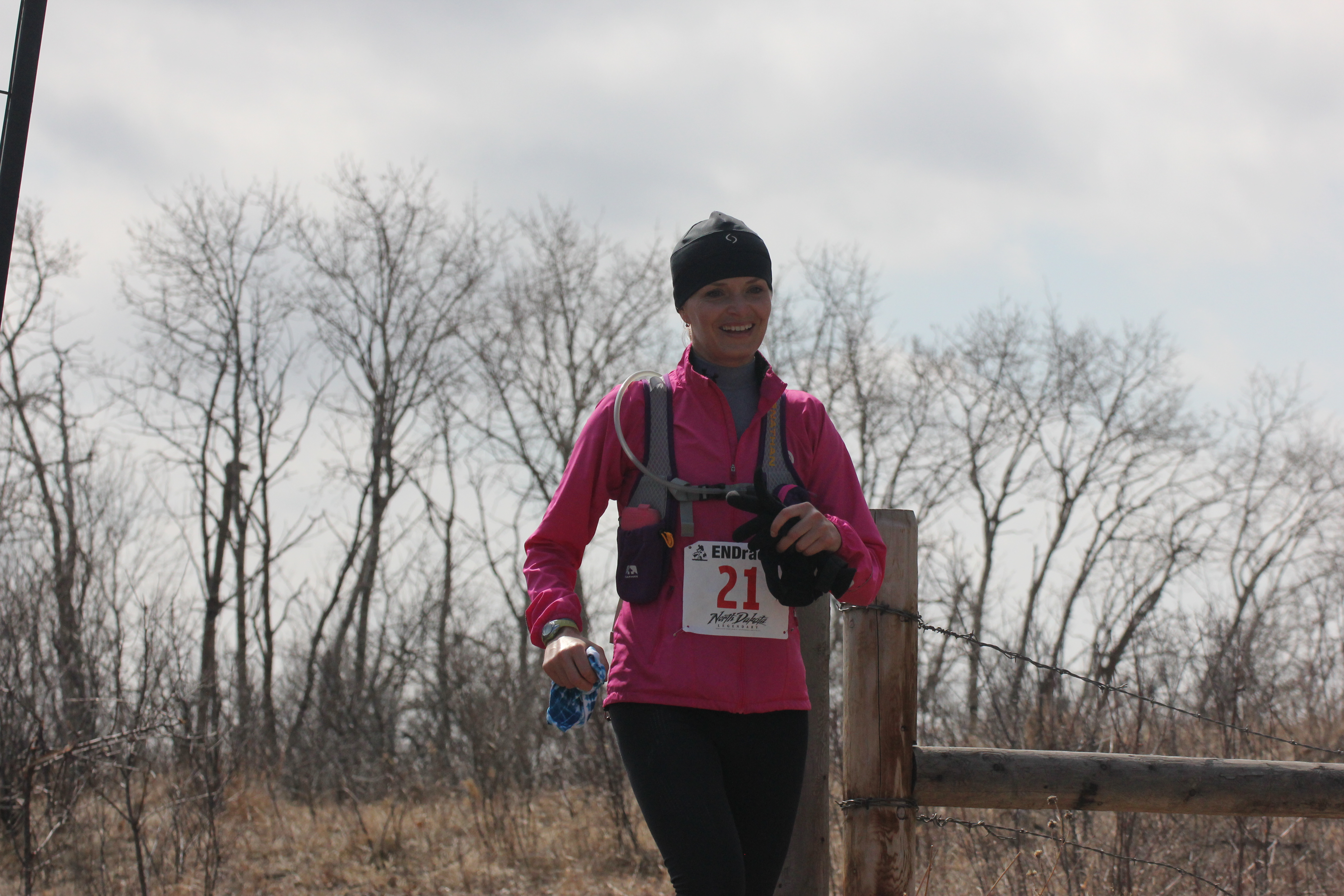 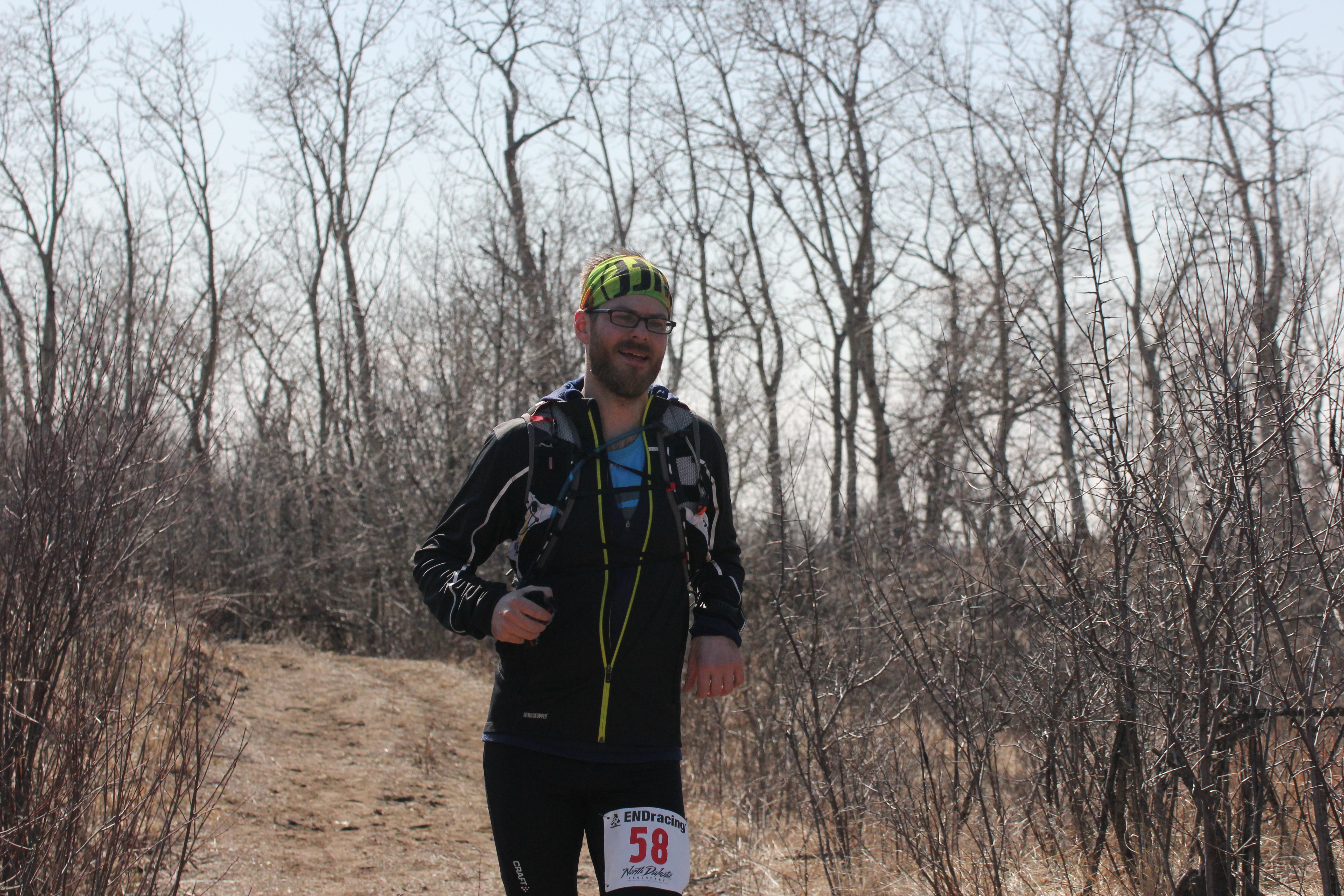 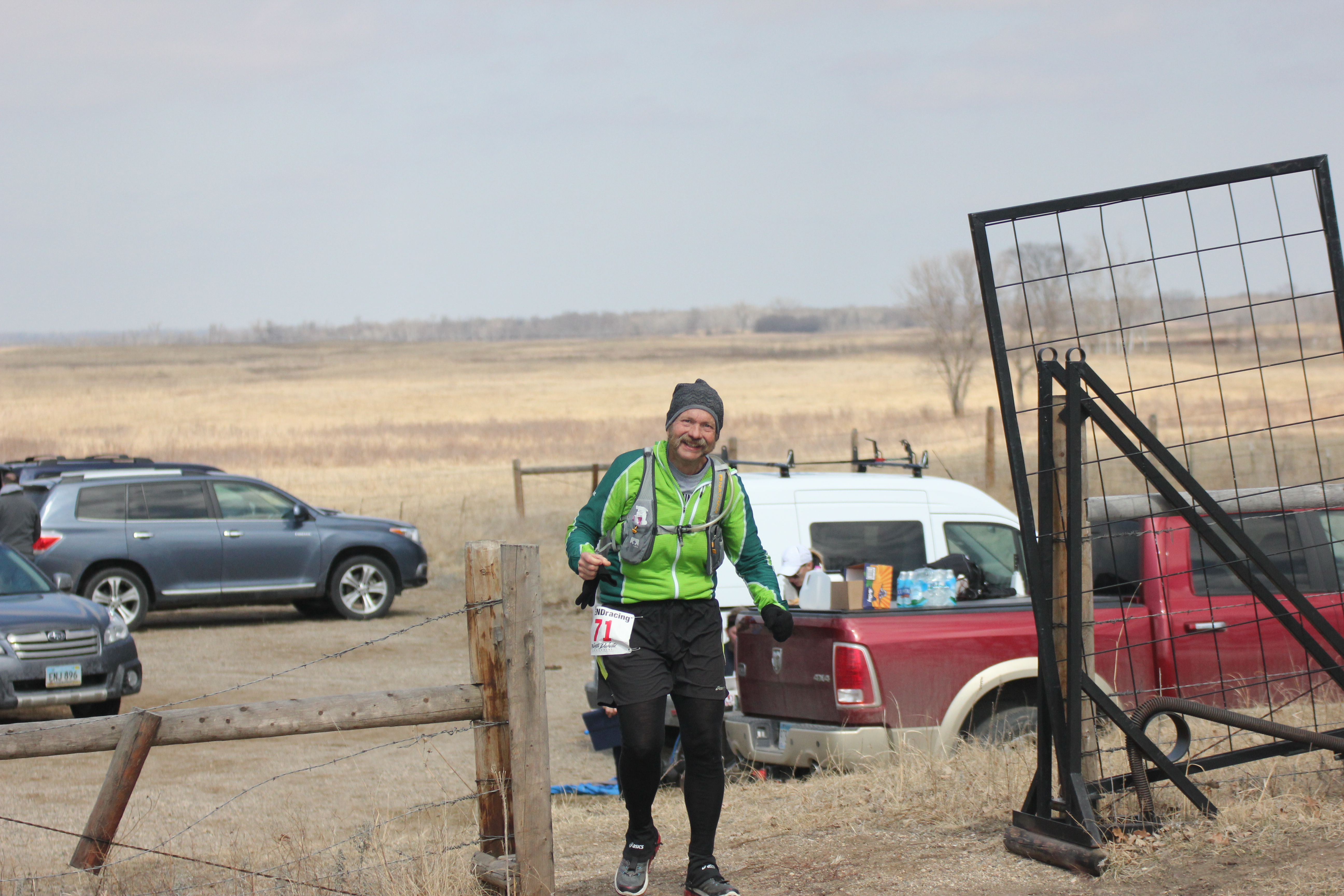 The following pictures are of the beginning of the 25k. With the Trail gate open the nearly 40 runners set off to enjoy the trail running experience. 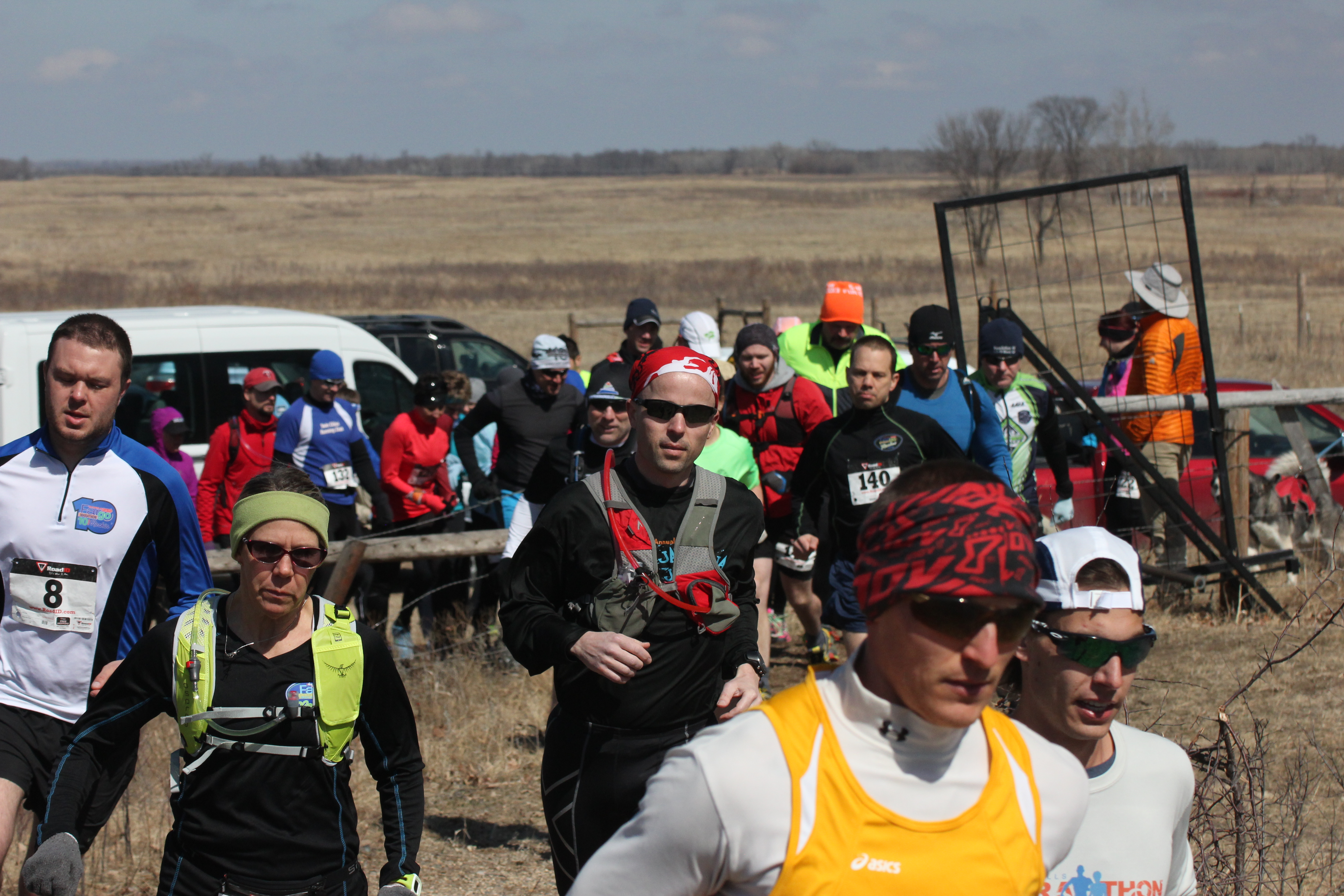 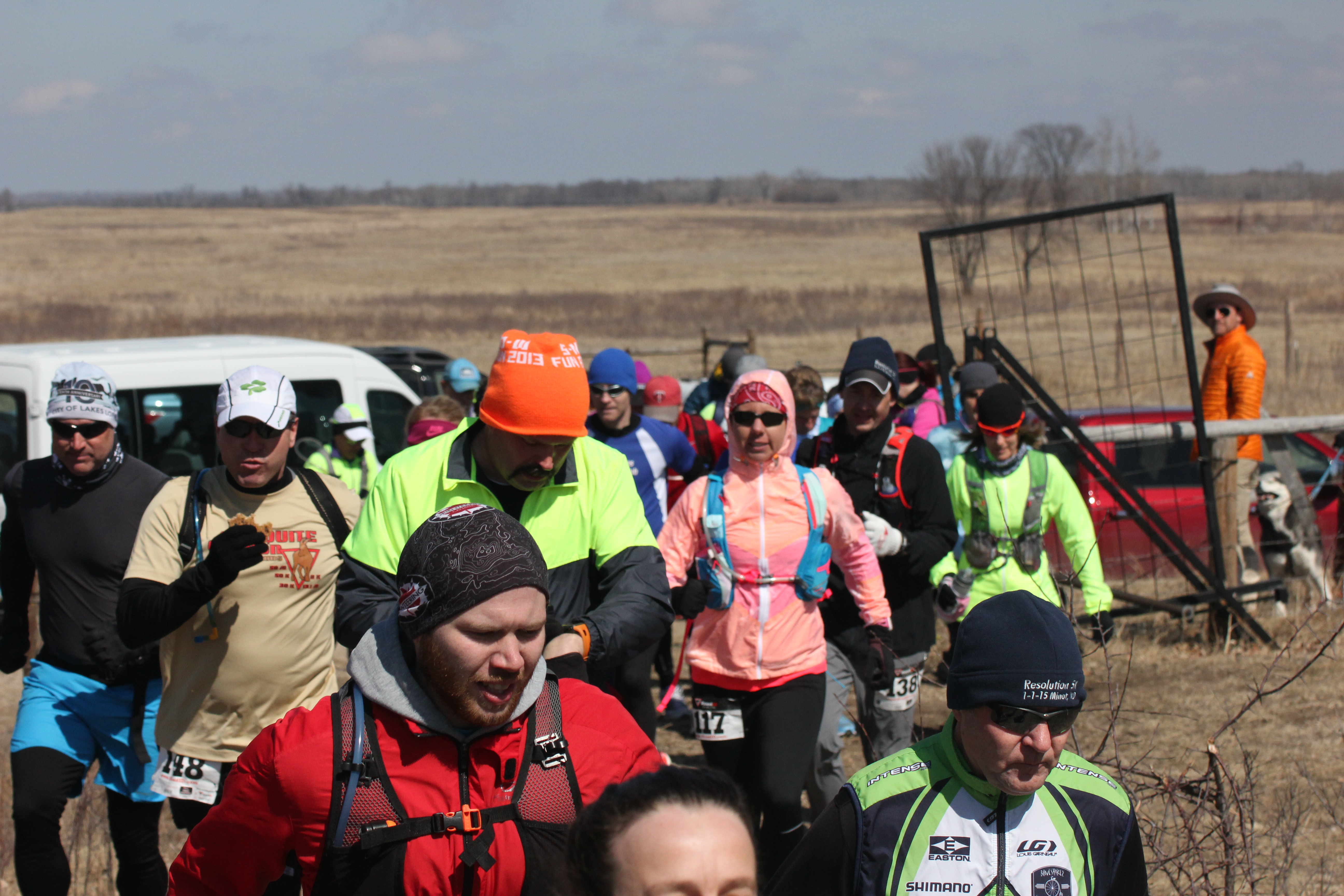 Finally, a couple more highlights of my day with this event. One of the supervisors of theSheyenne National Grasslands stopped by the 50k turn around aid station. He was very appreciative of the event being held and encouraged more diverse use of the Grasslands. He was a great source of information about not only the trail, but other areas and aspects in the Grasslands. So, there may be other events on bike and on foot scheduled this fall.

The other interesting connection was with a group of hikers on the North Country Trail. This group was the Dakota Prairie Chapter. They were hiking 9 miles from the trail head on Ransom County Road 53 (50k turn around aid station) going west to Highway Highway 27. I have contributed to the North Country Trail and was wondering how to volunteer to help with trail development and maintenance. My questions were answered by interacting with this group. They also provided encouragement to the 100k runners as they were returning from their 50k turn around.

Once again, thanks to everyone who made this event happen! In picking up course markings I was awed by the lack of debris along the trail from the participants. It’s a beautiful area of the state and you helped maintain its beauty while enjoying what it has to offer both physically, emotionally, and spiritually.