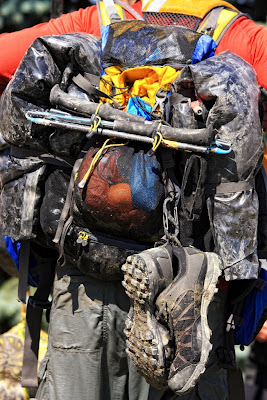 Registration is closed.  The race is three days away.  Maps are done, all the remote CP's are in place.
The schedule/rules/outline has been updated - RACERS - please check it out, read it thoroughly, and come prepared.  If you want a copy, print one... we're not bringing copies for teams to the event.
Ask questions if you have em.
Get ready for the toughest race in the state, cause it's ready for you!
Fans, Friends, Family?  Follow the race live HERE, or click on the link on the right link bar.  You'll get live updates via facebook or follow @endracing on twitter for updates straight to your mobile device.  And don't be shy - join in the conversation - root for your team, talk smack to their competition (keeping it clean of course) - it's all good!

I've been thinking a lot over the past few months about the art of race directing, probably because i've been spending so much time engaged in the activity.  In fact, lots of the time i feel like i've bitten off more than i can chew this year with END-AR24 coming so closely on the heels of END-WET, and right as i'm supposed to be gearing up for my 'real' jobs teaching a technical math course and some science blocks at the University.

Lucky for me, my wife is a saint (and it also helps that she's racing).

But i digress - what i'm really struggling with (in a good way) is figuring out the balance of what makes a great race here in the upper midwest.  This question was brought up again yesterday when i found in my inbox a plea of sorts for racers to sign up for a sprint race put on by the main adventure racing promoter in Minnesota, Wild AR.  Apparently they've got a 3 hour sprint event coming up the week-end before END-AR 24 that, at least as of my last check, had fewer than 30 participants signed up - the number they've decided is needed to make it a go (considering what they call the 'financial realities').

I've got some ideas as to why this might be the case.  One is that racing needs to be cheaper.  It is already a daunting sport for many, particularly at the upper level (just having even '6 hours' in the title puts off a lot of newbies who would be more than capable of doing well, but need convincing that this is the case), that the minute newer or even experienced racers see the price tag, they often look no further.  Sure, elsewhere in the country, even places as nearby as Winnipeg, there is a thriving AR community and people are willing to pay more.  But in North Dakota?  Minnesota?  Maybe not.  After all, there is little awareness of the sport out of the core group of people already hooked.  It's hard to hook new people, particularly level headed folks of scandinavian descent, when the prices are high.

But as important as the cost, is what you get for it.  If you do it right, in my opinion, you get an experience.  Swag is nice, sure, and so are fancy maps and free food - but if the race isn't totally bad ass you won't get people coming back.  People have to be challenged.  Some of the new people have to bite off more than they can chew.  Some will manage to get through it.  Some won't.  Not all will be back, but word will spread that the event is the real deal and this is what its all about.

So basically what i'm saying is this - I understand Wild AR's call for people to 'support local racing' and 'keep AR alive' in MN and the upper midwest.  But in my mind it's not as simple as that - we want to be lobbying racers to keep the right kind or AR alive up here.

Real Challenge.  Real Cheap.  And that attracts Real Competition. That is AR ENDracing style.  I wonder if maybe that is why we had 30 people signed up for END-AR less than 24 hours after we opened registration....

We love our sponsors, we really do. Not only do they help make our races a great value by donating lots of cool gear for us to give away, but the stuff they make is the best stuff out there.
In this age of Facebook, showing your appreciation is easy!  Just cruise on over to their facebook sites and "like" them.  Then, if you already use their gear, let them know or give them feedback on it.  And of course make sure to thank them for their support of our events!
Here is a quick look at some of our top sponsors and what you can look forward to at END-AR24...
GearJunkie.com - GJ.com is run by Stephen Regenold.  This guy is the real deal - a top adventure racer and all around endurance athlete.  GearJunkie.com provides daily tips, gear advice and reviews, and keeps the pulse of the nation's adventure scene.  Reading the GJ daily dose blog is my favorite work time diversion!
Alpacka Raft - Maker of the best pack-rafts ever.  In recent years several companies have tried to go head to head against these guys but no one comes close.  There may not be enough water to use the boats this year, but some lucky racer will win one after the race!
FrostFire - Frostfire is our host location again this year.  A great and friendly location with spectacular views!  Plan to come back next winter for some skiing!!
Ellsworth - Our bike sponsor.  I ride an Ellsworth and love it.  Awesome high end bikes.  Big supporter of our efforts and the efforts of other grassroots organizations.
Inov-8 - Makers of the shoes and packs I've used exclusively for the last 5 years of racing.  Some lucky racers will be going home with their own shoes and pack!
Swiftwick - YaHoo!  All racers get a pair of custom ENDracing swiftwick socks... the best socks ever!
Numa - unbreakable sunglasses in cool styles.  One pair will be raffled off at END-AR 24!
Ibex - Polypro is stinky and environmentally destructive.  Join the wool revolution.  Ibex makes the best performance merino wool clothing ever!
Ski and Bike shop - the best bike shop in Grand Forks!
Dakota Harvest Bakery - DHB as we affectionately call them make the best cookies in town (possibly the world).  My favorite are the bittersweet chocolate and sea-salt.  We'll do our best to see that one will be waiting for you somewhere in the middle of the night right before you descend back into the grim depths of the gorge.  Doesn't that sound nice?
The City of Walhalla - The city of Walhalla will be sponsoring a CP deep into the race.  Cold Drinks and goodies to lift your spirits and provide much needed energy.

Preface:  I'm a smack talker.  Many people who know me might be surprised to learn this, but it's true.  It started when i used to play racquetball with my brother - he was better than me and would often win, but i sure talked a better game.  In many ways it kept me from backing down - i'd do my best to put my money where my mouth was.  These days i don't get much opportunity to talk smack anymore.... so seeing one, it's pretty hard to pass it up...

I'll admit it.  As a racer and as a race director i'm a bit competitive.  When i hear about other races that make claims about being the best value, toughest, etc - particularly ones that are attempting to attract participants from the same pool of athletes, i get a little bit cagey.

And today i'm feeling particularly worked up, thanks to a newsletter that arrived in my inbox promoting the Thunder Rolls adventure race, a 24 hour event taking place in Illinois on the same weekend as END-AR 24.   My sense of competitiveness with Gerry Voelliger, it's race director, started a little over a year ago shortly after i announced a date change for the 2011 edition of END-AR 24 that was necessary for us to get a permit from ND fish and game, managers of over half the land that we planned to use.  My choice was between moving the event up one weekend or cancelling it entirely.  I moved it of course, and it ended up being on the same weekend as Thunder Rolls - a race that (taking place nearly a days drive away) wasn't even on my radar.  Gerry wasn't happy and let me know via email, essentially accusing me of hurting the sport by 'competing' with his event.

In all honesty, Thunder Rolls is probably a great race, and Gerry is, according to everyone i've spoken to that has done the race, a great race director.  But.... in the spirit of competition, i can't help but challenge a few of his ideas....

Ok, maybe it is a good value.  Racers get a fleece, camping the night before, and canoes are included in the cost.  Plus they get a pre and post race meal.  Awesome.  might even come close to adding the $100 in value to the race package it would need to to get to ENDracing level.  But then what if you don't need another fleece?

"This is THE PREMIER race to do and it is shaping up to be one of the, if not the largest adventure race in the country for 2012!"

Hmmm.... really Gerry?  Looking at your roster, there are a total of seven teams entered in the premier category (vs. 12 for END-AR 24), and nine in all the other categories, for a total of sixteen teams.  Yeah, you've got us beat on teams if you add in all the teams doing the 12 hour event, but that doesn't really count, now does it?  And all this even after they were 'featured' in Men's Fitness magazine.

Look, i'm not saying that Thunder Rolls isn't a good event. It's just that i'm passionate about the sport, work damn hard to put on bad ass events that i'd want to do and charge as little as possible for them. As i mentioned, i'm competitive. So naturally when i hear someone tooting their own horn mightily about the great race they are putting on, i check it out.  And if it doesn't entirely 'check out', it's time to lay down the smack.

END-AR24 racers!!!  We're a bit late in the game this time around, but as they say, better late than never.  If you want to take advantage of our great support from Ibex and pick up an ENDracing logo'd Echo T, a great top for warm weather racing, or just hanging out, shoot me an email or comment on the facebook link with your order - check out the mens here and the womens here.  Sizes may be limited, but we'll do what we can.  We need to order these by Thursday, August 9th to have time to get them printed by the race.

Price for the logo'd pieces is $45 bucks - quite a bit off of normal retail (of $80) and even less than their current sale price of $50 bucks.  We'll bring them to the race and hand em out then!