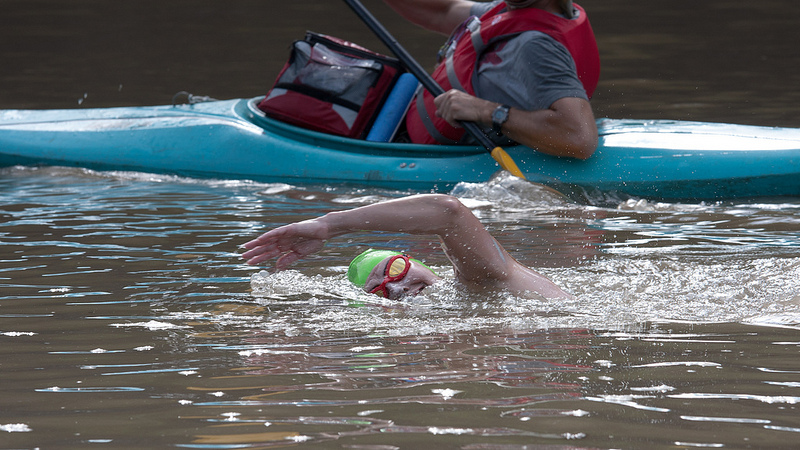 The swimmers might get the glory, but they don't do it alone.... Be an unsung hero--Volunteer

On June 21st two dozen or more crazy people are coming from around the country to Grand Forks, North Dakota, to participate in the longest one day swim event in North America this year, ENDracing's END-WET.  It is a 36 mile downriver race from near Climax, MN, to the center of the Grand Cities.  Each solo swimmer requires a support boater to be with them the entire race and although while a few of the swimmers are making the journey to the Red with their own support people, the majority of them are not.  Thats where you come in.  We need support boaters.  It's (kind of) a paying gig. ENDracing will provide all support boaters with $100 as a thank you giving up your saturday to help your swimmer attempt (and hopefully accomplish) what is nothing short of an incredible feat.  Than being said, don't do it for the money--its not really a good time investment economically speaking!  Sure the cash helps you have a nice party afterwords or take your significant (and very understanding) other out for date night, but even paddling 36 miles in a day is no joke.  And you'll be doing much more than that - you'll be looking after somene who's condition will deteriorate as the miles wear on - both mentally and physically.

Although the swimmers often get all the accolades, it really is a team effort, and the swimmers realize this.  They can't do it without your support.  We need roughly 20 paddlers.  It's no problem if you don't have your own boat, we've got craft to spare.  If you want to team up with a freind so you'll have company during the long journey or even to split the support job up into two halves (switch with a friend at roughly half way) then let us know (the caveat is that we only have $100/swimmer as a gift built into the budget if you team up you'd each get half).  The most important thing is that you have are comfortable paddling on the lazy red and willing to put in a rather long day on the water.  This is truly a one of a kind event that showcases the tremendous hospitality of our community.  There is nothing else like it anywhere--the only other swim anywhere near as long charges over $2000 to each participant.  This is cost prohibitive to many potential racers, and not our style.  We want these crazy people to be able to challenge themselves and visit our wonderful corner of the country without taking out a second mortgage.  And this is only possible because of both generous support from the City, Visitors Bureau, and incredible volunteers. Express your interest in volunteering for this year's END-WET at http://endracing.com/volunteer.