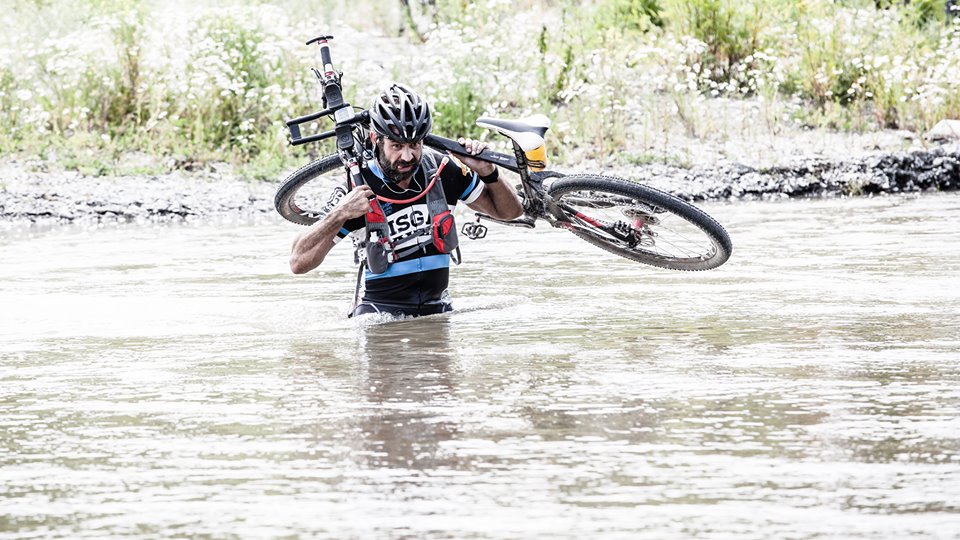 This is an epic race. If you missed it in 2014, don't worry, we'll be back in 2015 and are adding a 'half' option, which will still be freakin' hard! Please--before you decide to do this race read the race reports from 2014 (links at the bottom of the page).  Go in to this baby with your eyes open...

About: Accordng to one researcher, more peoplehave been to the moon than have completed an offroad full distance triathlon (check out a brief history of the endeavor HERE).  Crazy.  But I'm not sure how long that is going to last, because the off road full distance triathlon is coming back--this time with ENDracing, a grassroots extreme endurance events company based out of, of all places, North Dakota.

If you thought Ironman was the end of the road - the big enchilada - the pinnacle of multi-disciplinary solo effort endurance sports - think again.

Welcome to the Wilderman*

Course Details (for the full distance):  Course Map. Overall the course will get progressivly harder as you go.  Here's why -

Course Details (for the half distance):  Half racers will do one lap of the swim and almost one lap of the bike, and then face the second half of the run.  This means that they won't have nearly as much elevation gain as folks on the full course but will have some of the tougher creek sections, and the river crossing on the run.  Good times!

Registration: Less than 1/4 the price of Ironman!  Registration will open Jan. 2nd.  Note, there will  be no registration after July 9th, or after the race fills.

Registration Cap:  Race will be limited to 100 participants between both distances.

Registration includes:  Pre race meal (friday night) for full and half wilderpeople.  Wildpeople sticking around for Sunday morning can purchase tickets to a great breakfast/brunch for $10 each onsite. Wilderman swim caps for all racers.  All finishers of the full will get a commemorative T-shirt.  All finishers of the half will get a non-transferrable $50 credit for entry into the full next year. Other prizes will be awarded to top finishers of both the full and the half depending on sponsors and race numbers, but please don't do this or any ENDrace for the prizes--prizes are not our focus--quality suffering is.  Racers will have the option to purchase additional ENDracing swag for deep discounts during registration - stuff like socks, hats, and merino wool baselayers.

Safety: This is a difficult endurance race in a remote setting.  Much of the course does not get cell phone coverage.  Although we will have ATV's on hand to help with medical emergencies, extraction of racers from some sections of the course will be difficult and time consuming, and much of the run portion is simply inaccessible except on foot.  Racers should approach this event with a 'self rescue' mentality - particularly for the run course and at the very least, understand that in an emergency situation (broken bone, etc) it may take a signficiant amount of time before help arrives.  Racers may choose to carry a SPOT tracker or similar device which may speed up response time (if an injury occurs to a racer without such a device, we will likely only know once a fellow racer who passes them and becomes aware of the situation reports it at the next manned checkpoint/aid station). Racers carrying emergency devices will be responsible for making sure emergency signals are communicated to the appropriate race staff (numbers will be given pre race) either directly or through a third party (loved one following their progress at home, for example).  Mandatory gear will need to be carried on both the biking and running portions.  The list will be published leading up to the race, but will include essential items such as water purification, space blanket, a light source, basic first aid, and navigation gear (GPS or compass).

*Please note, the Wilderman IS NOT IN ANY WAY AFFILIATED WITH IRONMAN.  It is a triathlon however that covers roughly the same distance in each discipline as an Ironman Triathlon.  As we mentioned, the Wilderman is harder, better, wilder, and a heck of a lot less expensive than the Ironman event.

All profits from this event--and all ENDracing events--support Ground UP adventures a local North Dakota non-profit dedicated to bringing adventure to the region's youth and larger communities.